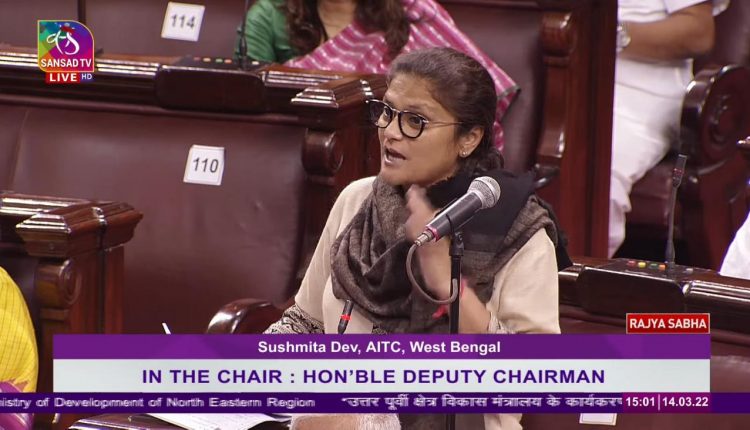 Member of Parliament of All India Trinamool Congress from West Bengal and an elected member to the Rajya Sabha Sushmita Dev spoke about the working of the Ministry of Development of North Eastern Region (DoNER). In her fierce remark in the Budget Session 2022 at the Rajya Sabha, she highlighted the shortcomings and questioned the appointed ministers of this ministry. Other than the issue of coal syndicate, the issue of Panchgram’s Hindustan Paper Mill was also brought to the notice of the house. An opposition leader from AITC, hailing from Cachar, also questioned the role of the North East Council and brought up the issue of cross-firing between the two states of Assam and Mizoram in the Lailapur border last year.

The address by this leader, mainly highlighted the issue of setting up the DoNER ministry in the North East, so that it is easily accessible to the ministers and public representatives of these states. The DoNER ministry that came into full-fledged existence in 2004, is responsible for the development works of the North-Eastern states and acts as a regional planning commission for the states. She questioned, “North East India accounts for 8% of India’s geographical land and has 3.8% of India’s population. Strategically it is also the most important part of the country because of the sheer fact that 90% of its border is shared with other countries such as China, Bangladesh, Myanmar, Bhutan etc. Should we continue to review the working of this ministry through the prison of the Security and Home Ministry”?

She further pointed out, “The DoNER Ministry operates on the 10% of the entire budget of the 54 ministries of this country. The allocation of this 10% in the year 2022-2023, only 5% went to Road and Transport, which is the lowest, 8% went to Health and Family Welfare, only 5% went to Rural Development. While we talk about poor communication in the North East, merely 1% of the budget was allocated to Telecom development. I speak in favour of strengthening DoNER, not weakening it. Whatever money is sanctioned in the northeastern states is always being spent on administrative reforms. In the state of Assam name of administrative reforms, the entire administration is working on NRC for the last 3 to 4 years”. Highlighting the illegal coal mining, she said, “The amount of coal that goes out from North East, illegally through the border is huge. The syndicate makes money while the state suffers the loss. The ministry must make policies for the reserves of coal in the NE”.

Her address didn’t leave the issue of Hindustan Paper Corporation as well and she brought this issue to the notice of the house through the speaker. The opposition MP said, “NEDFi, a nonbank financial institution that works under the DoNER, is doing nothing to save the two industries of Assam. Two paper mills of Hindustan Paper Corporation, one in Cachar and the other in Nagaon are in ruins. Assets worth rupees thousands of crores will be sold at peanuts. The Cachar Paper Mill is being liquidated only because ninety-two lakhs was owed to some trade creditor. Could NEDFi not restructure this debt and save the industry? You need to re-look at the functions of the NEDFi”.

Before concluding her address, she also questioned the role of the North East Council for its conflict resolution and working out the problem of insurgency. She further voiced, “What role is the NEC playing even after expanding its powers and functions? Today there is cross border conflict between Assam and Mizoram, between Assam and Meghalaya and also between Assam and Nagaland. NEC should not be a mute spectator to these issues. Development is not just about roads and infrastructure and water treatment plants. It must solve the border disputes, without which we are creating bad precedence. Have you ever heard the police of one state attacking the police of the other, in India? This is what has happened in the border between Assam and Mizoram and until today nothing has been done to solve this, other than compensation”. She demanded the setting up of DoNER ministry in the North-Eastern states for the swift progress of the North East, before concluding her remark.