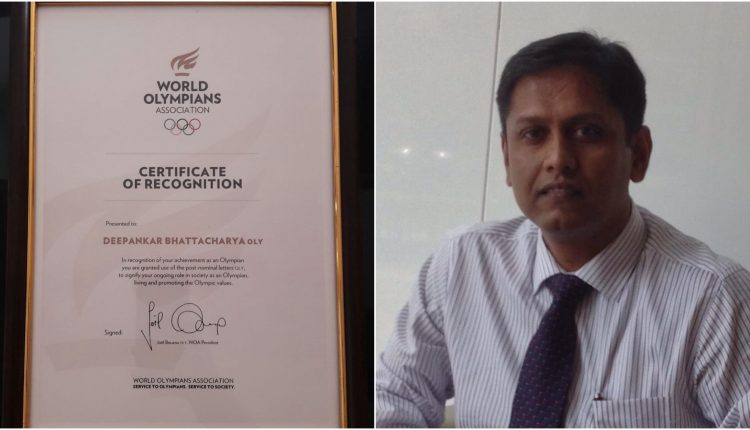 The story of Olympian Dipankar Bhattacharjee, “undoubtedly” the finest sportsman Assam has ever produced

Assam, the state which is the gateway to the North East of India is well known for its rich culture and diverse population. The State has given many great personalities to this country, in the field of Arts, Culture, Music, and Politics. When it comes to Sports, Dipankar Bhattacharjee the badminton player is one such famous son of Assam which evokes a sense of pride, every time his name is mentioned.

Born in Guwahati on February 1, 1972, in the Bhattacharjee family, Dipankar was initiated into the game by his father Ishwar Bhattacharjee who was his first coach at the age of five. The reason for his early introduction to the game, as he recalls “was to channelize his surfeit of energy into something which was meaningful” and badminton was to become the game for him to keep him away from all distractions.

As is the case with another sportsman, Dipankar was no different, the game which he took up merely as a hobby soon became a passion for him, However, he was destined to be a professional sportsperson even before he was born as his father was a dissatisfied sportsperson himself having been deprived of opportunities in team sports like Cricket and Football during most of his school and college life. His unfulfilled dreams made him a very unhappy man. He made a promise to himself to realize his dreams through his children. He knew that only individual sports were somewhat free from politics. So he chose Badminton for his children. Incidentally, he succeeded in his dreams to a great extent as all his four sons represented Assam in the Nationals in Badminton.

As if by a stroke of destiny, the seed of the golden period of Assam Badminton to come, was sown in Guwahati in the late 1970s, when Dipankar was just a toddler. The Kanaklata Indoor Stadium in Guwahati was built to host the Junior National Championship in 1977. As a toddler, Dipankar watched Syed Modi and Madhumita Goswami (Bisht) win titles. Surjit Singh was the NIS coach who coached the Assam team in the same stadium. Among the star players who represented Assam in that Nationals were Dip Baruah, Bipul Sarma and Pradip Chaliha. After that Nationals, Chaliha along with a few of his colleagues started an organized coaching center in the same stadium which had two good wooden courts.

There was a sudden spurt of public interest in Badminton in Guwahati. Lots of enrollment started happening. During the same period, Dipankar’s father took to Badminton along with his office colleagues when he joined Government service. He built an outdoor Badminton court in the neighborhood. After he finished his games with his colleagues, he played with Dipankar. As Dipankar progressed, he enrolled him in the Indoor stadium under the watchful eyes of Pradip Chaliha.

As a Sub Junior, Dipankar faced many hurdles and was discouraged by many. “They would tell me that I was wasting my time pursuing a career in Badminton,” says Dipankar Bhattacharjee. But his father was determined. He left no stone unturned to make sure that Dipankar got the requisite practice.

Dipankar started to compete in various age-group tournaments first in his own state Assam and then at the national level representing Assam. His first brush with success came in the year 1983 when he reached the boys singles final in the sub-junior nationals which were held in his home state Assam. The success of reaching the finals spurred him to do better in the coming years, eventually resulting in his triumph at the junior national championship which was held in erstwhile Madras now Chennai in 1987.

Dipankar’s success at the junior national championship became a defining moment in his life as he decided to pursue the game professionally after that. Though he was always a decent student academically and which he continued in the years to come but badminton was to become the fulcrum of his life. Once he started competing on the senior circuit, he soon reached the zenith of his career. In a long list of achievements, ones that stand out the brightest are his two Olympic participation- Barcelona 1992 where he lost to Zhao Jianhua and Atlanta 1996 where he lost to Haryanto Arbi, which is a record not broken till date as no other Indian player has participated in two Olympics.

His other major achievement was to play all three England championships in 1992,1994, and 1996. These achievements were considered huge then because of the limited facilities one had at his or her disposal to train and in Dipankar’s case, it was so much more difficult as he trained in a smaller centre in Guwahati. It was only in the later years between 1994-98 that he moved to Bangalore to train under Prakash Padukone. International exposure back then was confined to one or two international tournaments for a player in one whole year and the same yardstick applied to Dipankar too.

He had huge success on the national circuit, he was ranked as the number one player in the country from 1991 to 1996 which included the likes of Pullela Gopichand, Rajeev Bagga, Shrikant Bakshi and Sushant Saxena. In this period, Dipankar played five national finals winning three and losing in other two. The three finals he won came at the cost of Rajeev Bagga, Sushant Saxena and Pullela Gopichand. Apart from this won several other major ranking titles which include the Amit Rathi Masters Memorial Tournament which was a regular event in Mumbai in the nineties.

Badminton in India can be divided into two parts one pre-Dipankar and the other post-Dipankar era. In the pre-Dipankar era, Players relied more on stroke play and less on power. Though some of the pre-Dipankar era players like P.G.Chengappa, Sanjay Sharma and Uday Pawar used lot of power in their games. Except for Uday Pawar, people hardly jumped and played a smash, it was Dipankar who introduced power play in the game and the concept of jump smash in India. Since then it has become the order of the day. People thronged to the stadiums in the nineties just to see Dipankar’s style of play which was fast-paced with electrifying power and aggression.

He was the only Indian player in that era who had the potential to take on the best players from the badminton powerhouses of Indonesia, China and Malaysia. Despite having all the potential in the world, his march to the top of international badminton just did not materialize as he got injured far too many times, and due to the lack of proper sports medicine facilities in India in those days, he just could not recover from his injuries and finally gave up the game in 2004.

Despite facing so many drawbacks during his playing days he performed creditably well with a lot of success. With his sheer weight of performances and his two Olympics participation, he should have been bestowed with Arjuna and Padma awards but that wasn’t to be, and the gentleman he is, he never made any hue and cry about it. Took everything in his stride and has moved on to the second innings of his life where he has decided to give back to the game by coaching the upcoming players.

Please note: This is part one of the story, in the second part we will share what Dipankar Bhattacharjee thinks about the current state of Badminton in Assam.

Pradeep Behrani is a sports enthusiast himself and has been an avid follower of Bombay and National Badminton. He has had the experience of sharing the court with many top players of his time and currently plays in the veteran category