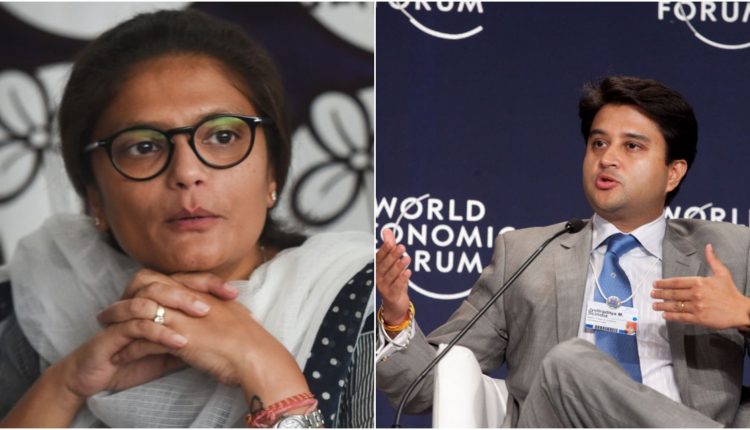 “Till date, no proposal to construct a Greenfield airport in Cachar” Jyotiraditya M Scindia’s response to Sushmita Dev

Big breaking news coming in from the Central Civil Aviation Ministry, Government of India. Jyotiraditya M Scindia, Minister of Civil Aviation, replied to the letter of Rajya Sabha MP, Sushmita Dev. Much like the RTI that BJP leaders of Silchar termed “mis-representation of fact”, the BJP Minister has now made it clear that there is no proposal at the table of the Ministry for the construction of the Greenfield Airport in Cachar District.

In absolute contradiction to what the Silchar MP, Dr. Rajdeep Roy has been saying, the Minister has given it in writing that the department has not received any proposal yet.

Minister Scindia writes to Sushmita Dev, “Kindly refer to your letter dated 24 May, 2022 regarding the development of a Greenfield Airport in Cachar District of Assam. I would like to inform you that Government of India (Gol) has formulated a Greenfield Airports (GFA) Policy, 2008 under which an airport developer or the respective State Government willing to establish a Greenfield airport is required to send a proposal to the Ministry of Civil Aviation (MoCA) in the prescribed format for 2-stage process i.e., ‘Site Clearance’ followed by ‘In-Principle’ approval.”

The shocking revelations of the Minister’s letter goes on to read, “Till date, no proposal as per GFA Policy, 2008 to construct a Greenfield airport in Cachar District of Assam has been received in the Ministry. However, if any such proposal from any Airport Developer or the State Government is received, the same would be considered as per the Greenfield airports Policy, 2008.” 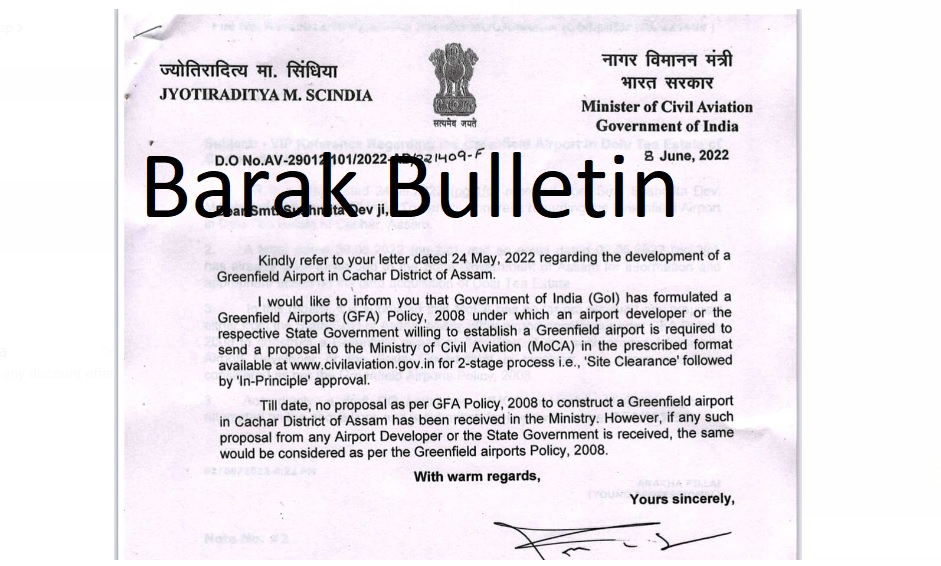 Speaking with Barak Bulletin, Sushmita Dev has shared her reaction to the response. “Silchar MP Dr. Rajdeep Roy has spoken outright lies in the all-party meeting held on the issue of Greenfield Airport. He has misrepresented facts and provided no transparency at all. It is bizarre that the administration has allowed deforestation of 30 lakh tea saplings which will eventually result in displacement good number of population.”

Since the proposal has not yet been sent to the ministry, the ministry is well within its rights to reject the same based on its understandings. In such a scenario, who will take the responsibility of the deforestation?

Sushmita Dev added, “There is no doubt that this is a conspiracy to carry out a corruption of humongous scale. I demand a CBI probe into the matter. The statement that were made by the Silchar MP, Chief Minister of Assam, need to be scrutinised. Without any approval from the Ministry, how can the MP make statements confirming the construction of Greenfield Airport.”

Very recently, response to an RTI filed by a resident of Silchar read similar responses. The MP countered them by posting a response by the former Aviation Minister to the question tabled by MP Queen Oza. The party’s Silchar leadership denounced the RTI and even questioned the integrity of the officer who drafted the response. Now, will they question the integrity of the Minister?