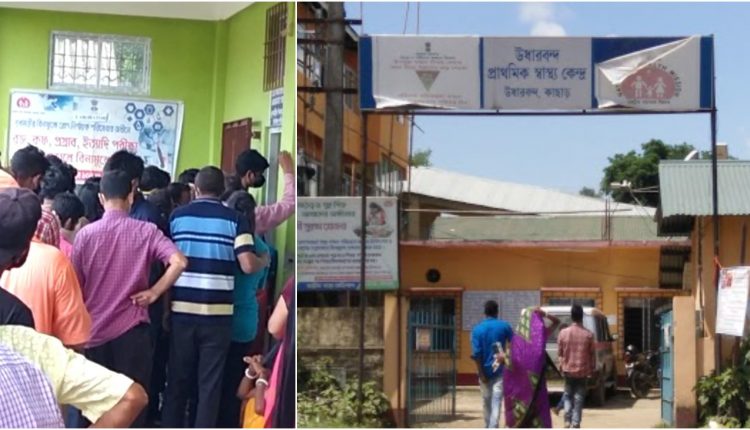 Vaccination certificate issued to Covid patient who didn’t get a jab; Irregularities continue in Cachar

55-year-old Dilip Das Purkayastha, a resident of the Pangram area in Udharbond, Silchar got a slot booked for vaccination on May 21. He got his slot for a jab of Covishield at Udharbond BPHC which is an authorised session site registered in the directory of the Ministry of Health and Family Welfare, Government of India.

He reached the spot and according to his statement, was tested for Covid19. His sample tested positive for Covid on the Rapid Antigen Test Kit. “I was handed over a piece of paper where my name was written and it stated that I am positive. They asked me to sit on a chair kept aside. I sat there for some time and then eventually returned home as suggested by a few locals,” informs Dilip Das Purkayastha.

He returned home without the jab as the vaccinator told him that he cannot be vaccinated when positive for Covid19. Yesterday, (on May 22) he got a call from the district health department and was asked to report to Silchar Medical College and Hospital. Since he is above 50 years, as suggested by the chief minister, the administration is more vigilant and only allowing home isolation if they are asymptomatic and have adequate resources at home. An ambulance was sent to his house and at around 4:00 pm, he was checked at the Casualty department at SMCH which is now a Covid screening centre.

“They checked my vitals and since I do not have any symptoms, suggested me to be at home in strict isolation for at least 14 days. I sat on the same ambulance and then on my way back home, they dropped me at Silchar Civil Hospital. The driver said he has to go somewhere else and his duty with me ends here. I got down and returned home in a reserved auto rickshaw. Had to spend around Rs 200 more,” informs Dilip Das Purkayastha.

However, as he reached home and checked his message, he noticed there is something about vaccination. Dilip Das Purkayastha works at a store and did not understand much about the message. So, he forwarded it to a family member. The relative clicked on the link and to her shock, she found that the government has issued a vaccination certificate against Dilip Das Purkayastha’s name.

“I did not even enter the vaccination centre, was returned from outside. I never got the injection, how could they issue a vaccination certificate against my name,” questioned Dilip Das Purkayastha. The relative adds, “Every day we see people from Hailakandi, Karimganj and far away enter the session site and get their dose. We, locals, have not got a single dose yet. Luckily, he forwarded the message to me and I downloaded the certificate, otherwise, no one else would have known something like this can happen. We feel there is black marketing going on and doses are inoculated illegally.”

District Immunisation Officer, Sumona Naiding is in charge of the vaccination drive in Cachar. When asked about the certificate without dose, she replied, “May be there is a technical issue. Since he didn’t take the vaccine and got the certificate, there must be a problem in the portal. We will call the person and manually handle the case. We will have to cancel the existing registration and register him again. The person can come to us (at Silchar Civil Hospital) after full recovery and we will look into the matter.”

Additional Chief Medical and Health Officer Family Welfare, Dr. PK Roy’s office inside the Civil Hospital has been under criticism for gross negligence of duty and black marketing of vaccines. Vaccination was conducted from a secret chamber near Dr. PK Roy’s office but he said he was unaware as he was undergoing dialysis and therefore remained absent. Magistrate inquiry of the matter is underway. While this is a recent incident, at the very beginning, this office brought Cachar national shame as 1000 doses of vaccines got frozen due to negligence of duty. Then, the National President of Mahila Congress and former MP Sushmita Dev, hundreds of others got SMS on their phones stating they have successfully got the second dose of the vaccine. Dr. PK Roy informed that the deputy commissioner has called for an inquiry of that matter too.

The question that arises therefore is who got the dose allocated to Dilip Das Purkayastha and on the bargain of what? Every week such irregularities are reported by the press, but hardly any action is ever taken apart from a few departmental inquiries. How Cachar District Administration reacts to this clear irregularity is something that remains to be seen.