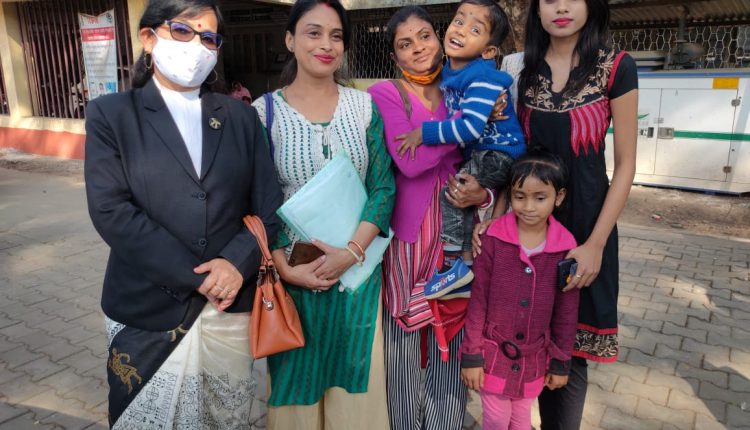 A resident of Malugram area of Silchar named Madhumita Deb got married to a man from Kokrajhar back in 2012. After marriage, she even moved with her husband to Gandhigram area of Gujarat. But unspeakable torture on the part of the husband started after the first year of her marriage, due to his alleged extramarital affair. In the following years, she became a mother of two children and even after alleged domestic abuse, the woman still chose to stay with her husband.

One day after the lockdown, her husband, after beating her severely, put her on a train and sent her to Silchar. She was not even allowed to see her children’s faces. After talking to various social organizations and common people in Silchar, the process of rescuing those two children began. Meanwhile, due to the illicit affair of the father and the domestic abuse of the mother, the condition of the children became all the more miserable.

With the help of a socio-cultural organization called ‘Dream Celebration’, the woman was eventually able to rescue her two children after going to Kokrajhar. This time, she intends to file domestic and sexual abuse charges against her husband and brother-in-law, as well as file for divorce.

Madhumita Deb narrated her story to the media while standing in the court premises of Silchar on Wednesday afternoon. She said, “In 2012, I got married to Madan Mohan Saha of Gosaigaon area of Sreerampur in Kokrajhar district. After marriage, I had to go through some harsh situations. At the beginning, I tolerated everything with my eyes closed. On one hand, there was this illicit affair of my husband, and on the other hand, I had to face sexual abuse on the hands of my elder brother-in-law. Above that there was a looming threat of death on me if I spoke about my ordeal. I have tolerated all of this and spent more than seven years in this condition. But during the lockdown period, they suddenly picked me up and put me on a train to send me to my father’s place. Earlier, my brother-in-law used to abuse me sexually quite frequently.”

“Last September, I came to my mother’s place to live with her. But I was still worried about the condition of my two children. I went to many people with mental anguish, but I could not get any help. At last, some women stood by me, and the members of Dream Celebration assured us that we would rescue the children through a legal battle. Then when I went to their Kokrajhar residence with the police, I found out that the children were in Gujarat by now. After receiving a stringent warning from the police over call, my husband agreed to hand over the children to me. This time I will fight against them legally.”

Speaking on behalf of Dream Celebration, Miss Nikita Banik said, “When we got the news and met Madhumita Dev, we found out that her children were in a lot of trouble. The District Legal Services Authority and Advocate Tinku Baidya promised to help us. In the legal battle, Advocate Tinku Baidya offered to help the victim by not charging a single penny for fighting the case. With the help of the Additional Superintendent of Police, Cachar, Jagadish Das, we went to Kokrajhar and there the local police were on our side as well. At first, Madan Mohan Saha’s family members refused to hand over the children to their mother, then said the children were in Gujarat. The Police then called Madan Mohan Saha and told him that if he did not listen, he would be arrested with the help of Gujarat Police. Fearing arrest, they finally handed over the two children to their mother. Now we will help the children to look after their future and education.”

Advocate Tinku Baidya said that a case has been filed against Madhumita Deb’s husband under Section 97 of the CRPC Act. The children were rescued with the help of the District Legal Services Authority and the police. This time her husband and brother-in-law will be prosecuted under the Protection of Women from Domestic Violence Act, 2005. The whole legal process will be done free of cost so that the victim rightfully gets justice.

However, no statement has come from Madan Mohan Saha or his family yet.