December 2018, Railway Minister of India, Piyush Goyal sits in a review meeting in Guwahati. While discussing various plans, he urges the officials to propose a Vistadome special train between Badarpur and Lumding. The babus in the Railways, say “Yes Sir” and that is when Barak Balley starts dreaming about Vistadome Special train.

The proposal remained packed in a file. December 2020, a day before the General Manager of Northeast Frontier Railways’ Haflong visit, the department wrote to the Deputy Director of Assam Tourism, Haflong seeking views on operating Vistadome Special trains in the hill section. The first major development since minister Piyush Goyal’s urge to propose.

February 2021, comes the breakthrough moment. Barak Bulletin reports it as a “day to rejoice”. Indian Railways allocates six Vistadome coaches to Northeast Frontier Railways. Two of them are for the Silchar to Guwahati section. The announcement comes a day ahead of GM Anshul Gupta’s official Barak Valley and Agartala visit. Lawmakers in Silchar praise Gupta and Indian Railways, thank Minister for the Vistadome Coaches. MPs and MLAs go on to say “It will be a major boost for tourism and economy.” Silchar MP Rajdeep Roy, who has always been vocal about communication and connectivity went on to say, “I will personally meet the minister (Piyush Goyal) and thank him.”

August 1, 2021, Barak Bulletin reports, “Major setback dreams shattered”. Vistadome Special train to operate only between Guwahati and New Haflong Railway Station. The report was filed only after accessing the documents that mentioned the development. August 4, 2021, Silchar MP Rajdeep Roy said he will have a conversation with the new Railway Minister of India and urge him to extend the Vistadome special till Silchar. He met the minister and submitted a written request, uploaded a picture of the same. His request, as of now, remains unattended or ignored. While Rajdeep Roy made attempts, another MP from Barak Valley, Kripanath Mallah is still in deep slumber. Despite having two MPs from Barak Valley, the region got snubbed from a Central project that was initially offered to it.

Several highly placed sources in NF Railways said that the demand was more from Guwahati. So, the NF Railways held an internal feasibility study. The study recommended that the total duration of the journey should not be more than five to six hours as this is meant for tourism and not commuting. They didn’t take a cue from the Vistadome special Deccan Queen running between Pune and Mumbai. It is a regular train with two special coaches. The argument that NF Railways presented is Silchar to Guwahati is too long a journey for the tourists to go and return. This contradicts the conventional wisdom in the tourism industry that promotes travel, eat, lodge, explore and return cycle for overall economic growth.

It is also a strategic disaster as half of the travel will be in dark leaving nothing for the tourists to enjoy. The biweekly train leaves Guwahati at 6:35 am on Saturday and Wednesday and reaches New Haflong Railway station at 1:15 pm. The train leaves from New Haflong at 5:00 pm and returns to Guwahati at 10:45 pm. Instead, if the NF Railways had extended it till Badarpur or Silchar, the train would have reached the destination at around 6:00 pm offering a whole day to the tourists to experience the scenic beauty. But the babus understand it better and so, when NF Railways decided to shorten the journey as Silchar to Guwahati was too long for tourists, they went ahead with Guwahati to the New Haflong section leaving out the scenic beauty that lies between Badarpur and Haflong. Why is it that the NF Railways decided to chop out Silchar – Lumding section and go ahead with Guwahati – Haflong has a simple answer. Barak Valley is a step-child at best and an orphan at worst. 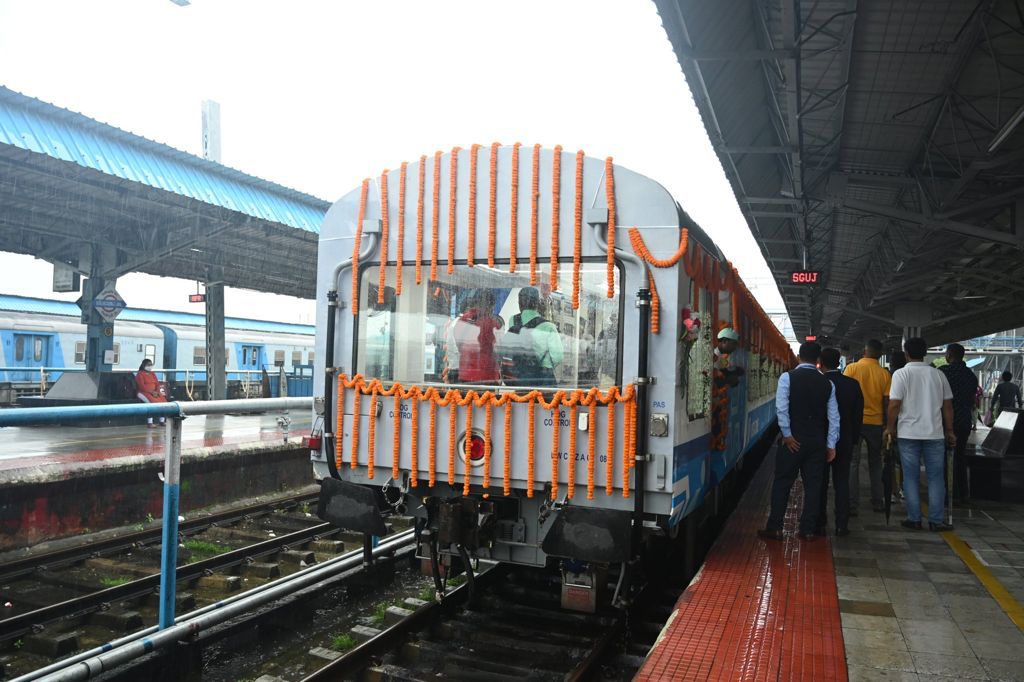 After Piyush Goyal made the announcement, many sources in NF Railways say, the policymakers from Guwahati were constantly following up with Railways about the proceedings. It wasn’t the case when it comes to the elected representatives from Barak Valley. The elected representatives got busy with the elections when the feasibility study was being conducted. The MLA was throwing stones at his own colleagues. The veteran leaders were busy blaming outsiders and the saga continued. Apart from Dr Rajdeep Roy, not a single lawmaker ever spoke about Vistadome. For them, it is a non-issue and so, NF Railways is well within its rights to assume that for the people they represent, Vistadome doesn’t matter.

Lastly, if the NF Railways would have commissioned an independent survey to find which section is more beautiful, Lumding – Badarpur would have secured higher ratings for sure. It is one of the most beautiful yet least explored sites within Assam. But then it’s always easy to ignore the merit of the stepchild.

With the help of inputs from Kushal Deb Roy’s relentless reporting on the Vistadome Special since December 2018.

Myths kill: More than 50% of the 215 who died with Covid at SMCH could have been…