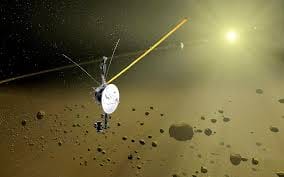 Whenever you feel lonely, think about voyager, writes Shrutitirtha Bhattacharjee

Today we will be talking about a lonely traveler named Voyager 1 who is the first man-made object to cross the solar system and enter the interstellar space. Here I would like to request the reader to imagine that he/she is Voyager 1 to make things more exciting

On September 5, 1977, Voyager 1 was launched from Cape Canaveral Air Force Station Space Launch complex 41. It left Earth on a journey with no destination.

On March 5, 1979, Voyager 1 made a flyby past Jupiter and snapped some of its pictures. It also explored the Galilean moons, snapped a picture of Io’s volcanic eruption.

It explored the Jovian system and gave us information about it. It took a time-lapse image of Jupiter and showed the movement of its cloud bands.

Then on November 12, 1980, Voyager 1 made a flyby past Saturn and did some research on it. It clicked pictures of Titan, Enceladus, and the rings of Saturn giving some idea about it. After that our sailor’s primary mission was over. When Voyager 1 was 6 billion kilometers away (distance between Earth and Pluto), NASA instructed it to turn its camera towards Earth for the last time on Valentine’s Day of 1990. A tiny blue speck no bigger than a pixel was seen. That was our lovely planet, the picture was so thought-provoking that the great Carl Sagan wrote an entire book named “PALE BLUE DOT” on it. The picture described our insignificance in the greater cosmos. Voyager 1 continued its journey towards the far reaches of the solar system, towards a darker region with very little sunlight.

On December 15, 2004, at 14 billion kilometers Voyager 1 crossed the termination shock, a boundary marking one of the outer limits of the Sun’s influence and is one boundary of the solar system. There, the solar wind particles slow down so that particles are traveling slower than sound. Finally on August 22, 2012, at 18.4 billion kilometers, Voyager 1 crossed the Heliopause, the boundary between Sun’s solar wind and the interstellar medium, literally the last boundary of the solar system and became the first object in human history to exit the solar system and enter interstellar space. It travels with a speed of 62,140 km/hr or 17.2 km/sec .

Now since Voyager 1 will be traveling through interstellar space, so it might encounter extraterrestrial intelligent species. So NASA added a Golden phonographic record on Voyager 1. It includes sounds and images selected to portray the diversity of life and culture on Earth and were intended for any extraterrestrial life who may find them. It includes 90 minutes of influential music from around the globe, 116 images of humans, nature and science and greetings in 55 languages including our beloved Bengali language. Many other Indian languages like Kannada, Gujarati, Hindi, etc have been added.

In Bengali, it says “hello, let there be peace everywhere”. Murmurs of Earth, birds chirping, thunderclaps, the sound of rain, wind, sea waves, etc have been added. The voice of men, women, and children greeting have also been added. US President Carter’s official statement has also been included :

“ We cast this message into the cosmos. Of the 200 billion stars in the Milky Way galaxy, some, perhaps many; may have inhabited planets and spacefaring civilisations. If one such civilisation intercepts Voyager and can understand these recorded contents, here is our message

This is a present from a small distant world, a token of sounds, our science, our images, our music, our thoughts, and our feelings. We are attempting to survive our time so we may live into yours. We hope someday, having solved the problems we face, to join a community of galactic civilizations. This record represents our hope and our determination, and our good will in a vast and awesome universe”.

The record also contains an hour-long brain wave (EEG) of Ann Druyan, wife of the great Carl Sagan. She thought that a record of the brain wave of a human being could help them to decipher human thoughts. It was recorded on June 3, 1977. The Voyager’s golden record is made so compact that its data will be extractable even after 1 billion years. By 2025, no power source will be left to run any of its instruments and thus NASA will put Voyager 1 into an eternal sleep. After that, it will be our interstellar messenger.

On January 1, 2016, Voyager 1 was 20.1 billion kilometers from us. Chances of Voyager 1 encountering extraterrestrial life forms in this colossal universe is very low. The Voyager 1 is now sailing in the never-ending cosmic ocean. But the message it carries will be our legacy. It will narrate stories of mankind to the extraterrestrial beings, their achievements, their passion, their linguistic diversity. It will tell them about the planet Earth, its vast oceans, bewildering wilderness, snow-capped mountains, self-less trees and variation in climates and seasons.

The image of Earth from Pluto was an awe for astronomers all around the globe . Carl Sagan described the inner meaning of this image

“Look again at that dot. That’s here. That’s home. That’s us. On it everyone you love, everyone you know, everyone you have heard of, every human being who ever was, lived out their lives. The aggregate of our joy and suffering , thousands of confident religions, ideologies and economic doctrines, every hunter and forager, every hero and coward, every creator and destroyer of civilization, every king and peasant, every young couple in love, every mother and father, hopeful child, inventor and explorer, every teacher of morals, every corrupt politicians, every “superstar,” every “supreme leader,” every saint and sinner in the history of our species lived there– on a mote of dust suspended in a sunbeam.

The earth is a very small stage in a vast cosmic arena. Think of the rivers of blood spilled by all those generals and emperors so that, in glory and triumph, they could become the momentary masters of a fraction of a dot. Think of the endless cruelties visited by the inhabitants of one corner of this pixel on the scarcely distinguishable inhabitants of some other corner, how frequent their misunderstandings, how eager they are to kill one another, how fervent their hatreds.

Our posturings, our imagined self-importance, the delusion that we have some privileged position in the Universe, are challenged by this point of pale light. Our planet is a lonely speck in the greater enveloping cosmic dark. In our obscurity, in all this vastness, there is no hint that help will come from elsewhere to save us from ourselves.

The earth is the only world known so far to harbor life. There is nowhere else, at least in the near future, to which our species could migrate. Visit, yes. Settle, not yet. Like it or not, for the moment the earth is where we make our stand.

It has been said that astronomy is a humble and character-building experience. There is perhaps, no better demonstration of the folly of human conceits than this distant image of our tiny world. To me, it underscores our responsibility to deal more kindly with one another, and to preserve and cherish the pale blue dot, the only home we’ve ever known.”

Our universe is awfully vast and our intra or intergalactic neighbours are really far away from us so who knows, but if aliens find Voyager 1 then it would be a great deal.

After several years mankind might devour itself or a space rock would eliminate us and our planet but Voyager 1 will still be there. It will carry our message of peace to the extragalactic civilizations and tell them stories about us.

It’s 2019 and Voyager 1 is sailing through the cosmic ocean, slammed by interstellar winds. Our lonely messenger will keep on traveling through the cosmos and even after 1 million years, the record will narrate the story of our existence to the stars. Our fearless lonely explorer is sailing in the vast universe, a journey with no end . Until the last day it will fly past several star system and planets, encounter aliens, maybe, or may succumb to the high energetic cosmic rays.

Its companion Voyager 2 is also sailing in the same ocean but in a different path …. They are sailing in a pitch black environment right now. Sounds scary, right ……..