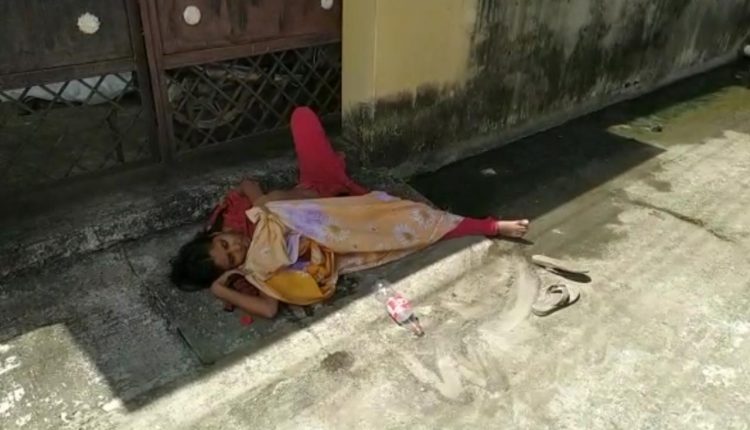 Woman suffering from burn injuries found lying in Karimganj; “Out of danger,” doctor

A mysterious woman was found lying and in agony in front of a lane in Karimganj today. Initially, found by some locals claimed that the woman had been crying for help when they found her at Lakhibazaar road in front of a lane. Later, it was found that the woman was suffering from burn injuries in her lower torso, which is why she was crying in agony. Then Robin Hood Army was contacted and on behalf of that NGO, Sujan Deb Roy took the woman to the Karimganj Civil Hospital.

When the woman was admitted to the Karimganj Civil Hospital, after initial tests, it was revealed that the woman in question had suffered around 15% burn in her body. Attempts to ascertain her identity and the reason behind her case failed as the woman was not in a state to communicate properly. “When I arrived at the scene and saw her crying for help, I found that she had been suffering from burn injuries. So I immediately took her to the Karimganj Civil Hospital and also informed the police. There the doctor confirmed that the woman in question is a bit mentally challenged, and hence her inputs cannot be relied upon. There the doctor ran some tests and hopefully, she’ll be fine soon”, said Sujan Deb Roy.

When Barak Bulletin got in touch with Dr Bijit Das of the Karimganj Civil Hospital, he said that the woman is doing okay now and the burn sustained by her is 15%. “Usually, we can only admit patients who have sustained more than 20% burn injuries, but in this case, as the victim had nobody with her and also her identity is yet to be ascertained, we took her in for the time being and was admitted in the Surgery Ward. The police were also informed and they have assigned a lady police officer who will be with her until she’s admitted here. Her vitals are okay now but from what I could ascertain, the patient seemed mental challenged, so her words cannot be relied upon as of now”, said Dr Bijit Das who treated the victim when she was brought to the hospital.

Although the woman in question is out of danger now, still this issue begets many questions that need to be answered. How come such a helpless woman was rendered defenceless in an urban town and left to suffer in broad daylight? What about the injuries sustained by her? Were they self-inflicted? Of was the woman deliberately put on fire? So many questions yet nobody has any answer to them. When the Karimganj police were asked regarding this incident, they refused to comment and only said that ‘further investigation awaiting’.