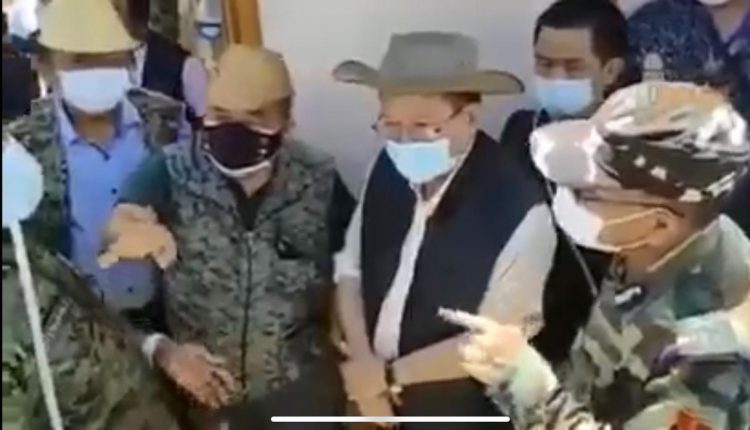 A video has gone viral on social media which features the Mizo Force in uniform engaging in a heated argument with Shahnawaz Khan, CRPF DIG. Khan keeping his demeanour, was soft spoken and trying to calm the Mizo officers in uniform.

Not only did the Mizo officers raise their voice in a provocative manner but also pointed fingers towards the senior officer of the Central Force, deployed as per the instructions of the Ministry of Home Affairs. “You are not neutral force, you are biased force,” alleged the Mizo officer while pointing finger at Khan.

“Very shameful,” the officer added, to which Khan addressed him as “Sir”. The conversation continued and at one stage it was heard that the Mizo officer was saying, “They (CRPF Jawans) are under his (Kolashib SP’s) command.” The Mizo officers alleged that the CRPF jawans conspired against Mizoram SP, “Sir, rest assured that have issued a probe into the matter and we will take action if someone is found guilty,” responded Khan.

The soft-spoken, well-behaved CRPF DIG kept his calm and was trying to initiate a dialogue to reach amicable solution to reduce tension at Assam Mizoram border where six Assam Police personnel were killed during the Mizo onslaught within the territory of Assam.

Taking cognisance of the video, Silchar MP, Rajdeep Roy posted on Facebook, “When central police forces approached Mizoram officials to negotiate a peaceful route to sort the border tension, this is how they responded. Request all to take note of the conversation and the body language. All this conceit even after signing an MoU.”

This conversation in itself exposes the Zoramthanga government and its behaviour. The question here is if the Mizoram Government really wants an amicable solution to this issue and if they want peace to prevail in the Northeast. The onus is on Zoramthanga and his bureaucracy.