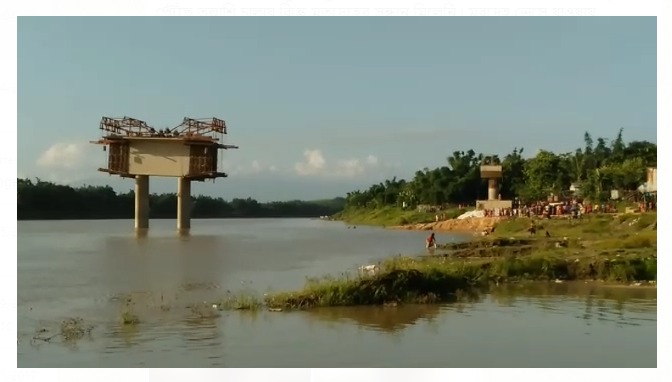 On Sunday morning, a youth from Bihar, who was living in a rented house in the Malugram area, drowned in the Barak river bank of Annapurna Ghat. The security forces could not rescue him even after many search campaigns. His body was found floating in the area on Monday afternoon. It has been uncovered that the man named Dipak Shah went to bathe in the river with his companions on Sunday morning. And that’s when the incident happened after which he went missing.

One of the victim’s companion, Jitendra Shah, who went to bathe with him, witnessed the entire incident. He said Dipak Shah was talking on the phone while sitting by the water when suddenly one of his slippers floated away. He then jumped into the river to save it, but the high current of the river washed him away. To save him, another friend of his Munna Mahato also jumped into the river but in vain. Two other companions tried to save the two of them, one tried to save Dipak by jumping onto the river and the other tried to save Munna Mahato by offering a towel forward. Munna Mahato survived with the help of the towel, but Dipak Shah could not be saved. The survivors then informed the locals and after a while, many tried to find Dipak by diving.

According to the locals, the four youths from Bihar live in a rented house on Swamiji Road in Itkhola. They have come to Silchar for business purpose. On Sunday morning everyone went to bathe together and that is when the accident happened. Along with the locals, the SDRS forces came and tried to find the washed away youth. But they could not find the lost victim. His body was finally found floating on the river on Monday afternoon.

This incident has again raised questions about the efficiency of the security forces. Recently, there have been several accidents in the vicinity adjacent to the Annapurna Ghat where the security forces failed to find the drowned people. Whereas the body would later be recovered from the same spot.

Sources in the police have said that the body was sent to the Silchar Medical College & Hospital for autopsy. Besides, the department is going to take necessary measures in this regard so that such accidents do not happen in the future as well.