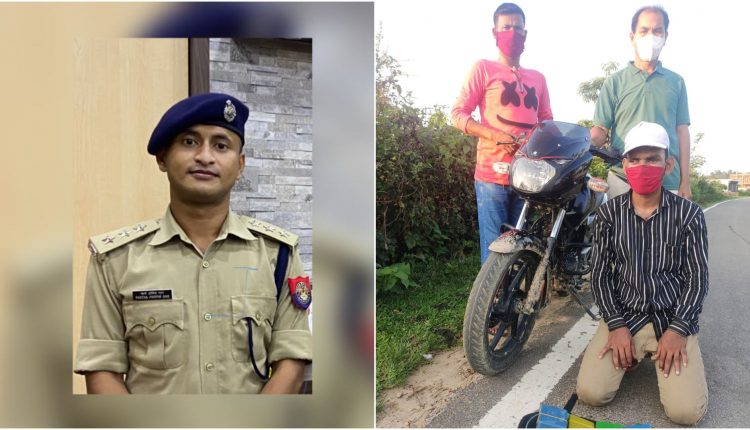 On Saturday evening, in an operation led by SDPO Lakhipur, Partha Protim Das, the police managed to detain a peddler. Identified as Shiraj Uddin Laskar, the peddler is a resident of Nuton Ramnagar area under the Sonai Police Station.

The Police spotted a man riding on a two-wheeler without a number plate. That is what prompted the Police to follow it. After following the black motorcycle for a while, the Police stopped it near the Binnakandi Ghat area. On searching the man’s belonging, the Lakhipur Police recovered 12 soap cases consisting of 179 grams of suspected heroin. According to news reports, the kilogram of heroin costs around Rs 3 crore in Assam.

Speaking with Barak Bulletin, SDPO Partha Protim Das said, “Since the biker was riding on a motorcycle without a number plate, we started following it. Eventually, we have managed to detain the culprit. He is a peddler, after interrogation, he gave us an address from where he apparently collected the suspected heroin. We raided that place but the person is missing. The Police is investigating the matter and we are after the racket that is behind this.”

If Police sources are to be believed then there is immense pressure on the senior officers to bust the racket of drugs. A source in the Police department said, “Since the time officer Vaibhav Chandrakant Nimbalkar took the charge as superintendent of Police, he has been pushing the department to unearth the racket behind drugs and smuggling of illegal substances. He has also given liberty to the officers to conduct raids and operations on the basis of tip-offs.”

It is worth mentioning here that in 2019, similar raids against the alleged drug mafia were conducted by Cachar Police under Mugdhajyoti Dev Mahanta as SP. Mahanta had taken over the charges from Additional Superintendent Rakesh Reddy. After Silchar MLA Dilip Paul alleged that SP Rakesh Roushan is involved in illegal activities, he was transferred in 2018. After that, Reddy held command till Mahanta took over. Within a span of three to four months, several consignments of Yaba Tablets, Heroin, Cough Syrup… were confiscated. The cumulative worth of the seized substances was estimated to be around Rs 10 crore. But within a year, Mahanta was transferred and the hard stance against drugs too softened.

In an interview with Barak Bulletin, DGP Bhaskar Jyoti Mahanta was asked about the issue of smuggling in Barak Valley and what could be the possible solution (Read the full interview here). The DGP’s response was, “Narcotic substances are mostly smuggled from Myanmar. Lack of coordination among the North-Eastern states has led to the thriving of such menace. Drug trafficking is a major concern area for us and significant action has been initiated to curb the spread of this societal evil.”

The head of Assam Police added, “A new focus is being initiated to identify the supply chain and key players who are involved in this illegal business. Efforts are already in place to go deep into the licensing aspect of the sale of antispasmodic drugs and cough syrups so that the procurement sources can be identified and targeted.”

While the Cachar Police under Nimbalkar (Click here to know about the new SP) has attained some success in confiscating Narcotic Substances and detaining peddlers. If the Police manage to unearth the racket and arrest the kingpins is something that remains to be seen.