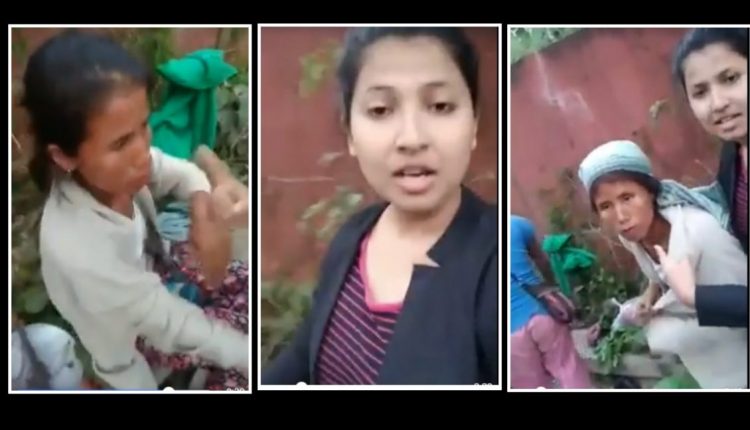 A video has surfaced on social media showing a girl abusing, threatening, dragging and beating up a woman-vendor at a busy area in Silchar while others were shooting the video.

According to sources, the incident took place on November 24 when some youths, including girls, approached few tribal woman-vendors at a roadside market near Oriental High School at Jail Road in Silchar after spotting a “doubtful-looking” bag with the vendors.

When they asked the vendors to open the bag they refused to do so following which the youths engaged in a verbal duel with the vendors. One of the girls went berserk and assaulted a woman vendor. The bag, which was later opened, contained a dog with its mouth and legs tied up with a rope, sources said.

The youths suspected that they had stolen a stray dog and were about to sell its meat. Two vendors were thereafter taken to Silchar Sadar Police Station and a complaint was later lodged against the vendors, who hail from Fulertal village in Cachar district, for allegedly stealing a stray dog to sell its meat. The matter was being inquired by the police.

The three-minute video, which has attracted the attention of a huge number of users on social media, shows a girl identified as Durba Paul, a resident of Ambikapatty in Silchar, abusing, threatening, dragging a woman-vendor by her hair and beating her up amidst the presence of some other people. The video also features two other youths Priya Mazumder of Rangirkhari and Sagnick Gupta of Ambikapatty.

Few eye-witnesses and local shopkeepers have confirmed about the incident.

Sagnick Gupta confirmed the assault and said Durba Paul had beaten up the vendor. “Hitting the vendor was a mistake. She (Durba) should not have done that,” he said.

He claimed that the dog, which was found with the woman vendors, belonged from their neighbourhood and alleged that the canine was stolen.

Sharing her reaction, Durba Paul said on Wednesday that she had beaten up the vendor in the “heat of the moment”.

She claimed that the dog, which was found with the vendors, was a local stray dog and they (vendors) had kept it inside a bag to sell its meat. “Initially, we asked them politely from where they got the dog to which they started giving arbitrary answers. They even engaged in an argument which infuriated us and I beat one of them in heat of the moment,” she said.

Meanwhile, concerned citizens of the town have expressed their fury over the assault on the woman vendor and strongly demanded action against those involved in the incident.

Biplob Goswami, president of the Grahak Suraksha Samiti and a resident of Ambikapatty, said beating up the vendor was not right under any circumstances. “This is totally unacceptable,” he said and demanded that strict action should be taken against those involved.

Cachar superintendent of police Rakesh Roushan told Barak Bulletin on Wednesday that the matter would be investigated thoroughly and necessary steps would be taken as per law.

Stern action will be taken against anyone found involved in anything illegal, he added.