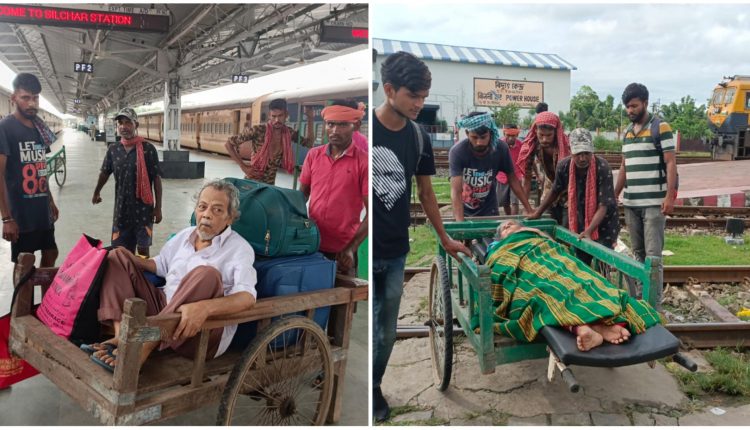 Elderly couple from Silchar got stranded in Kolkata after their son’s death; Here’s how Rising Youth Society rescued them

When an elderly couple was helplessly stuck in Kolkata after the sudden death of their son, a Silchar-based NGO reached out to them with help. Rising Youth Society after several attempts brought them to their hometown and took full responsibility for their care and shelter. With them, they have also launched their own shelter home for senior citizens.

The woman is 70-year-old and has a fractured leg and back. She can’t even sit upright and her movement is restricted to the bed where she spends the whole day. The old father, who is 74, can barely walk even with the help of support. In this condition, they were stuck inside the house and had no one to look after them as their only son passed away. One of their relatives got in touch with Rising Youth Society and asked them for help.

Speaking about this, Pinak Roy, the President of Rising Youth Society said, “It was a very cumbersome process indeed. The first time our volunteers went to Kolkata and tried to bring them here via train. But their body was so weak and due to health deterioration, we realised that train travel won’t be healthy for them. Later we tried again and this time via flight. We booked the tickets from Kolkata to Silchar and this time too our volunteers were present to help them throughout the travel. It wasn’t possible again happen because the airport authorities and the aviation company didn’t allow them to travel given their health conditions”.

This didn’t deter the volunteers of Rising Youth Society and they did try again. Pinak Roy further said, “Even though our first two trials didn’t work, we were determined. When both their conditions got a bit better, we booked train tickets and three of our volunteers went to Kolkata again. With the help of a relative, they boarded the train to Silchar and finally reached here on July 31. From now onwards they’re our responsibility and we will take the best care of them”.

Rising Youth Society has started their own shelter home with this elderly couple, which according to their president is “not an old age home”. The “Senior Citizen Caring Home” is in Link Road, Lane Number 15 where the elderly couple will reside happily as this NGO takes responsibility for their health and shelter. Pinak Roy has also said, “We have recruited volunteers to help them round the clock and we have talked with doctors and physiotherapists for their proper care and treatment”. On behalf of Rising Youth Society, Rahul Roy, Tanuj Dutta and Rohan Roy volunteered them from Kolkata to Silchar.