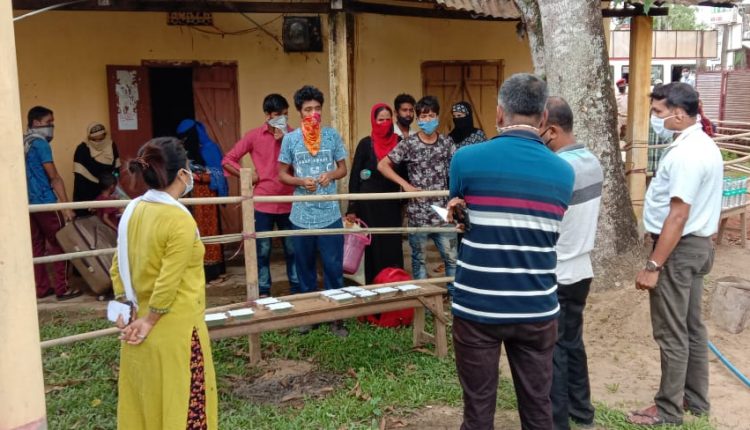 119 returnees from Andhra Pradesh put under quarantine in Hailakandi

119 passengers of Hailakandi arrived from Andhra Pradesh by 7219 Vijaywada-Jiribam special shramik train at around 6.15 am on Wednesday.

Deputy Commissioner, MN Dahal inspected the entire exercise along with senior officials of the administration and health.

Later, the incoming persons were put under quarantine facility at Jawahar Navodaya Vidyalaya at Monacherra and the girl’s hostel of PK Girls’ High School at Lala. They will remain under quarantine for a period of 14 days.

Dahal said the administration is preparing a contingency plan in view of information regarding incoming migrant workers from outside the state by special trains to Hailakandi in the next three to four days. He said that the administration would have to gear up well in advance as ‘people are returning in droves in the next couple of days’.

Dahal said accomodating a large number of returnees would be a difficult proposition keeping in view the bed strength in the designated quarantine centres and against that emerging situation the administration would have to send those whose swab samples tested negative to home quarantine.

“The administration was expecting at best 60 to 65 passengers from Andhra Pradesh today and made preparations that way. But more than 100 persons deboarded,” said an official at the screening campsite.

Several government buildings and institutions have been already identified by the administration for quarantine purposes, besides facilities in isolation wards in hospitals.

Another special train 07056 from Lingampally is arriving Badarpur railway station en route to Jiribam on Thursday. The train that departed on Tuesday at 12.05 am is expected to reach Badarpur at 6.35 am on Thursday. Of the total 1,029 passengers arriving by the train from the southern state, 40 are from South Assam’s Barak Valley, including 10 passengers from the Hailakandi district.

Another snatching incident at Tarapur in broad daylight, again miscreants riding on…