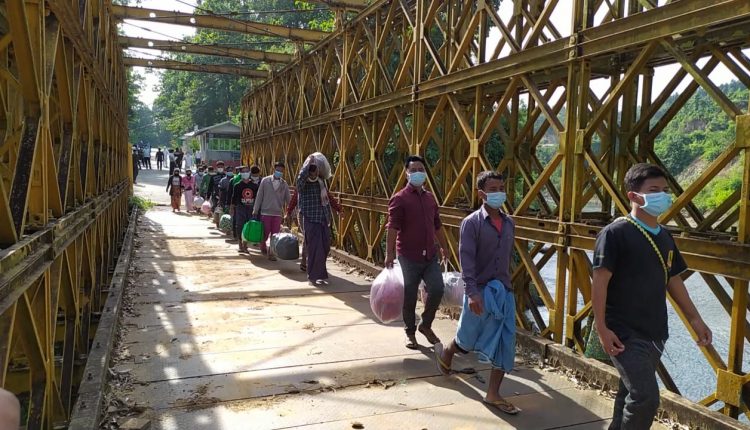 19 infiltrators detained in Silchar and 8 in Manipur return to Myanmar, 34 Indians return home

After the lockdown, the central government has started sending foreign infiltrators detained in India back to their respective countries. Recently, Bangladeshi infiltrators kept in detention camp inside Silchar Central Jail were sent back. This time a total of 26 Myanmar nationals, including 19 detained in Silchar, have been repatriated. They were repatriated through the Moreh border in Manipur on Thursday. At the same time, 34 Indian nationals detained in Myanmar were brought back to India. At noon the international border between the two countries was opened and citizens of both sides entered their respective countries. The work was carried out under the direction of the Home Ministry of the Central Government and was supervised by local government officials.

According to official sources, they tried to enter Manipur through Assam during the lockdown period but got caught. They were caught on their way to Manipur via Jirighat at the end of May. They entered India without any valid documents and reached different parts of the country via Manipur and Assam. Some of them were working at a factory in Farukabad, Uttar Pradesh. Due to the lockdown, they lost their jobs and were caught trying to enter Manipur through Assam for returning to their country. They came from Farooqabad to Jirighat for returning to Myanmar. Their intention was to enter Manipur and return to Myanmar via the international Moreh border. But on the way to Manipur, they were intercepted by the police at Jirighat. The court later sentenced them to four months in prison for entering India illegally. At the end of their sentence,19 infiltrators were kept at the detention camp in Silchar Central Jail since last September.