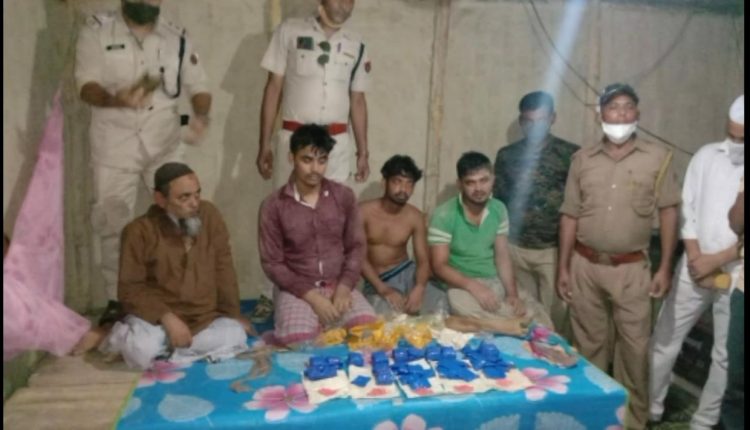 The Assam Government’s war against illicit drugs is at full throttle. Yesterday, in a joint operation by the Patharkandi police and Karimganj police, 20,000 yaba tablets were recovered from a raid in Patharkandi’s Panighat area. A few smugglers were also arrested in this operation and one of them also tried to attack policemen in resistance but fortunately, nobody was harmed and the accused was restrained eventually.

The incident happened on Saturday, July 10 in the Panighat area in Asimganj of the Karimganj district. Based on a tip-off, Patharkandi police in collaboration with Karimganj police raided the residence of a certain Rokib Uddin of Panighat area in Asimganj and recovered 20,000 yaba tablets. They also arrested smuggler Nasir Uddin in connection with this racket. But while seizing the illicit drugs found there, the police were attacked by three other people in resistance but fortunately, no one was harmed in the end and the police were able to restrain and arrest all of them. A separate case has been registered against them for assaulting a policeman and they are Abdul Qadir, Saifullah, and Abdullah. The police also said that the market value of the seized yaba tablets is around Rs 60 lakh.

Karimganj Superintendent of Police, Padmanabh Baruah, said, “Based on a tip-off, Karimganj police and Patharkandi police undertook a joint campaign where they raided the house of a certain Rokib Uddin of Panighat village in Asimganj under the Patharkandi PS jurisdiction.”

He added, “During the raid, we were able to recover 20,000 yaba tablets whose market value is around Rs 60 lakhs. In this connection, we also nabbed a smuggler named Nasir Uddin, s/o Abdul Hannan of the same Panighat village. However, during the raid, some other culprits tried to attack policemen while resisting arrest but thankfully nobody was harmed and we were able to arrest every one of them. In this context, a separate case has been filed against the three of them for assaulting policemen in the line of duty which is a serious offence. All of them are under our custody as of now.”

The Karimganj SP also lauded the efforts of the Patharkandi police team who worked in collaboration with the Karimganj police in this successful joint operation and said that in future too, there will be stricter campaigns against such illegal drug rackets in the district in support of the anti-drug campaign of the state.