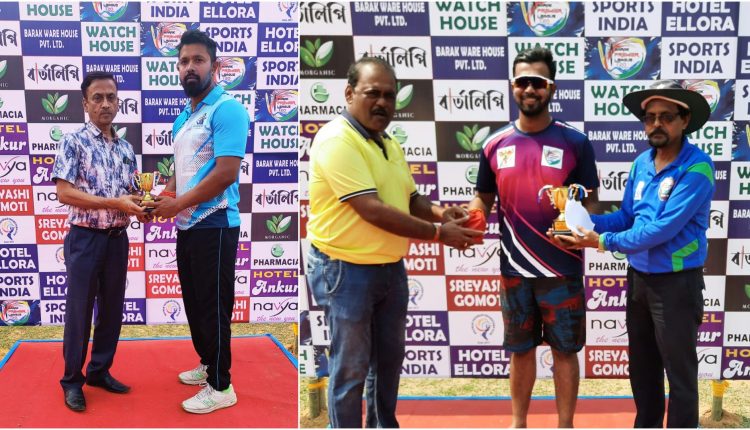 290 in 20 overs; Star-studded Gladiators steal the show on day-3 of BPL, easy win for Challengers

What a day of cricket at the Satindra Mohan Dev Memorial stadium in Silchar. In the second match of the Day-3 of Silchar Veteran Cricketers Club (SVCC) organised Barak Premier League, star-studded Hailakandi Gladiators scored 290 runs in 20 overs. The spectators remain mesmerised as the ball sailed over the boundary line time and again in the quarterfinals.

The Hailakandi gladiators opted to bat after winning the toss. Taking on against the Udharbond Transformers who held the record of scoring the highest total in the tournament, the Gladiators got off to a great start. First it was the wicket-keeper batsman from Tripura, Udiyan Bose who had cut loose. Another opener, captain of the team Krishendu Das did not take time and both the batsmen started hitting all across the park. One of the sixes went to the Cachar College while many landed on the top tier of the gallery.

The onslaught continued and the opening partnership managed to put 137. Udiyan Bose (63 of 32) was the first wicket to fall. Captain Krishnendu Das continued and scored 78 of 34 balls. Both the openers were dismissed by Nirjhar Das. However, credit for Krishnendu Das’ wicket goes to Debojyoti Deb who took a jumping-stunner on the rope and then threw it inside to dive in and grab. But there was no stopping the Gladiators. Pritam Deb Nath scored 87 of 32 balls. Crowd-favourite Manishankar Mura Singh who also plays for Tripura scored 28 of 11 balls. Yogesh Kumar (27) remained not out with Nath as they went on to set a target of 291 runs for the Transformers.

Nirjhar Das picked up two wickets but conceded 58 runs in his four overs. Arijit Mahapatra picked the other wicket but he too went for plenty (68 runs in 4 overs) and was the most expensive.

Chasing a huge total, Transformers lost early wickets and never managed to get back in the game. Centurian from the previous match, Shubam Deb crumbled under pressure and went back to the pavilion after scoring 4. Realising that the game is sealed, Gladiators saved their top bowlers and tried part-timers instead. Debojyoti Deb latched on to the opportunity and scored 92 runs with the help of six sixes. Udharbond Transformers played out their 20 overs and scored 175 runs.

The crowd was disappointed as star-player Manishankar Mura Singh bowled only one over. He picked a wicket while Abhijit Chakraborty bagged 3 to win the match by a mammoth 115 runs.

In the first match of the day, Royal Challenger Silchar defeated Silchar Strikers. The latter won the toss and opted to field. All-rounder Samik Das walked in to open the innings with Roshan Kumar. Kumar was slow but Samik Das was hitting all around the ground. He played a crucial knock of 38 runs of 17 balls before getting dismissed. It was his early aggression that allowed the Challengers to take time and settle. Yasir Ali (13), Kumar (13 of 27) followed Das to the pavilion.

Delhi’s Mayank Rawat and captain Abhishek Thakuri started building a partnership. Rawat was dismissed by Subhajit Paul in what can be called a strategic masterclass. Paul got in the brain of Rawat by pulling short while in the run-up. Next ball, Rawat pulled out of his mark and Paul had to go back to his mark. Both made an eye-contact and then Subhajit bowled one short and wide which Rawat (31) could not cut in the gap and got caught in point.

It looked like the Challengers are struggling to put a defendable total but then Thakuri, who was otherwise very slow, managed to use the slog overs well. He scored 30 of 22 balls to take Challengers to a formidable 147 after 20 overs.

Consistent this year, Dibakar Johori was the pick of the bowlers again. He picked three wickets, Subhajit Paul, Avoy Kumar Yadav, and Sudarshan Sinha picked one each. It is worth mentioning here that, Sinha conceded only 8 runs and had a maiden over in his tally.

The wicket was playing well and 148 was an average score very much chase-able. But it was chaos and carnage in Silchar Strikers’ batting lineup. Opener Prasenjit Sarkar who is also the captain of the team returned for a duck. Mujibur Ali also failed to open his account. They were bullied by short-pitch deliveries from Bal Krishna and Deepak Khatri.

Bhargav Borah walked in at four and both he and Krishanu Dutta started rebuilding the innings. In the process, they were slow that the match went away from their hands. Only Subhajit Paul (30 of 20 balls) showed some intent but the rest lost sight of the required run rate. Opener Krishanu Dutta remained not out at 42 after playing 55 balls. Despite having wickets in hand, why the Strikers did not give it a chase in the quarter-final, remains a mystery. Their innings ended at 117 for 6.

Mayank Rawat did for the Challengers what Sudarshan Sinha did for Strikers. Rawat bowled four overs and picked a wicket after conceding 9 runs. Deepak Khatri who missed out with the bat, picked two wickets.

In the semi-finals tomorrow, Silchar Strikers will play Silchar Lions while Guwahati Bud Club will take on the Hailakandi Gladiators. Both the matches will be played at SM Dev Stadium.