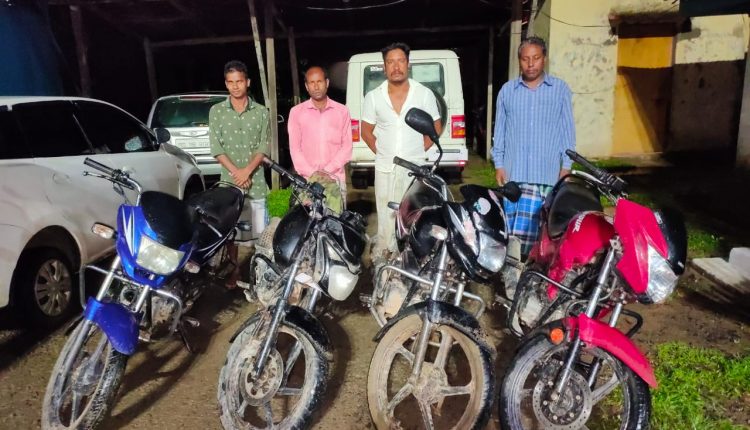 In the Hatirar area of the Lakhipur constituency of the Cachar district, 4 suspected motorcycle thieves were nabbed by the Sonai police yesterday. The incident happened when Sonai police were informed about 4 suspicious people possessing 4 motorcycles each and were spotted in the Hatirar area by the informants. Sonai police led by OC Manoj Rajbongshi rushed to the scene and detained those 4 suspects in possession of 4 motorcycles each, having no registration or official papers regarding their vehicles.

The detained suspected bike thieves are Bakhtar Hussain Barbhuiya, Habibur Rahman Mazumdar, Bebul Hussain and Shitul Alom Mazumdar. Regarding the arrest, Sonai OC Manoj Rajbongshi said, “On getting tip-off regarding 4 suspected individuals having unregistered motorcycles, we rushed to the Hatirar area where they were reported to have been spotted. On being asked about their vehicles’ registration card and other required documents, they couldn’t provide any, which raised our suspicion. Moreover, two of the four motorcycles didn’t even have any number plate on them, and the other two which had, after checking the database, we found that those two number plates were fake too and originally belonged to an autorickshaw and another vehicle. Hence, we were sure that these bikes were stolen from somewhere and are a matter of time before we get to know about their original owners.”

As of now, it is yet to be ascertained who the original owners of those four motorcycles are, as the investigation is still on.