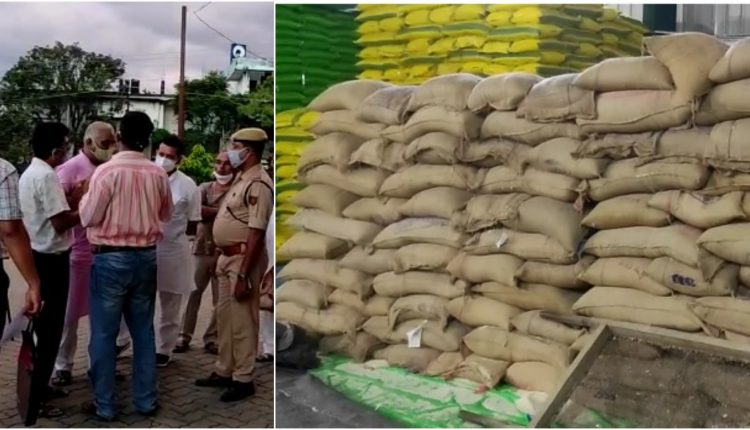 Last evening, a team of officials from the Food and Civil Supply department led by the Supply Inspector of Cachar, D Pathak raided a godown in Ramnagar Cachar. According to them, during routine inspections, they found certain anomalies due to which the raid was conducted. After raiding the Godown operated by Lunia Marketing Private Limited, the officials confiscated 405 sacks of rice subsidised by the Food Corporation of India (FCI) for selected beneficiaries belonging to certain economic stata.

“The team had come to this godown in Ramnagar for routine exercise and when we found 405 sacks of FCI stamped rice stocked in the godown we said we will seize it. That is when our officers were obstructed on duty and a few of them were subject to manhandling. We informed the Police about the same and eventually seized the rice,” said Supply Inspector, D Pathak.

405 sacs, each containing 50 kilograms of FCI subsidised rice was loaded on a truck and shifted to a government facility. “When we asked them to furnish document of authentication, they have showed us a paper of May 2020, which we don’t consider as valid and that is why we decided to seize the stock of rice,” said the supply inspector.

Mulchand Baid, president of Foodgrains Merchants Association rushed to the spot and was seen in a video, urging the inspector to keep the stock at godown and enquire the matter. There are reports which claim that the FCI subsidised rice was about to be supplied to Mizoram through an illegal channel of trade.

Speaking with Barak Bulletin, Baid said he went to the spot only after he was informed about the untoward incident. He said he has no stake in the company that operates the godown from which the FCI stamped rice was confiscated.

Lunia Marketing Private Limited is an agro-trading giant in the Northeastern region established in 1998. From offering economical options in price-sensitive markets to reaching out to connoisseurs of basmati rice, Lunia trades a wide portfolio of rice. It has its corporate offices in Guwahati and Shillong. “There is no doubt that Lunia Marketing is a valid organisation and it is legitimately operating the godown. The stock was authentic and the seizure is unfortunate. Such harassment of business establishments could have been easily avoided if the Supply Inspector did not get carried away,” asserted Mulchand Baid.

The Government under various schemes auctioned FCI subsidised commodities to the private parties in order to avoid wastage. “The rice that was seized was acquired legitimately during the auction. The papers were furnished but the inspector said it is not possible that such old stock is still pilled. He is unaware of the market dynamics. The government has been providing free ration and it will continue to provide till Diwali at least. Due to this, rice with a market price of below Rs 30 does not sell at all. The buyers of that rice are getting the rice for free, that is why the rice was stocked. We will meet the deputy commissioner of Cachar and submit all the documents to her today,” the Cachar president of Foodgrains Merchants Association

Baid said that the rice was bought under the Sale of food grains, reserve price & MSP – OMSS (D) Open Market Sale Scheme (D). The ball now is on Supply Inspector, Pathak’s court and it remains to be seen if the inspector and his team of officers at Food and Civil Supply manage to table a case that stands the scrutiny of law of the land.