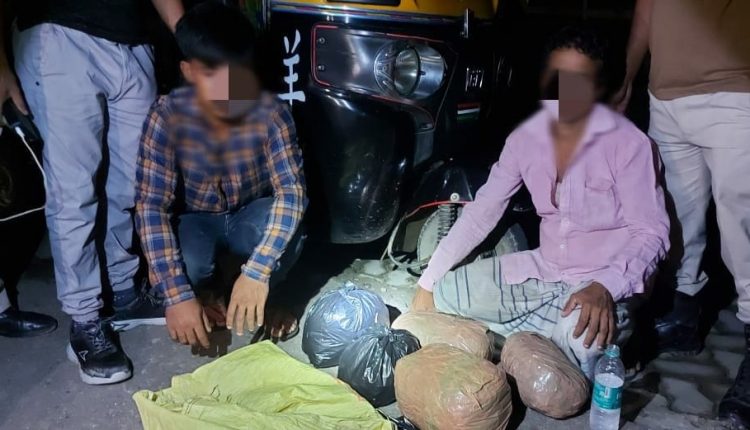 Karimganj SP, Padmanabh Baruah informed that from a secret source, the Badarpur police got intel that illicit drugs were being transported with the help of an autorickshaw.

“After getting the intel based on a secret source, the Badarpur police were able to intersect the autorickshaw and after proper search, 5.52 kg of ganja was recovered. The two people who were trying to transport the seized amount of ganja were also arrested and the investigation is still on. We’re yet to ascertain the source from where this much amount of ganja came and where they were planning to deliver. A case has already been filed against the duo”, said Karimganj SP regarding the drug bust.

According to sources, the names of the arrested two are Abdul Salam (45) and Zakir Hussain (30) hailing from Deorail village. They were planning to transport cannabis by the autorickshaw bearing number AS-10AC-2634, when Badarpur police got the intel in advance and laid down the trap in the National Highway to catch the two smugglers.

When the autorickshaw came in front of the wedding hall, the police intercepted the authorities and blocking them in front of their vehicle. From the autorickshaw, the Police recovered a total of five packets containing 7 kg of cannabis. The arrested duo was scheduled to hand over the seized ganja to someone in the nearby Malakar Basti area before the police were able to nab them.

Since the Himanta Biswa Sarma-led government has come to power in Assam, the war against illicit drugs has taken a much more serious turn with reports of police busting drug rackets almost every day, especially in the three districts of the Barak Valley. Although such effort of the administration is worthy of applause, still one cannot help but wonder why only foot soldiers or petty smugglers are always caught and not the big fishes who are pulling the strings from behind.