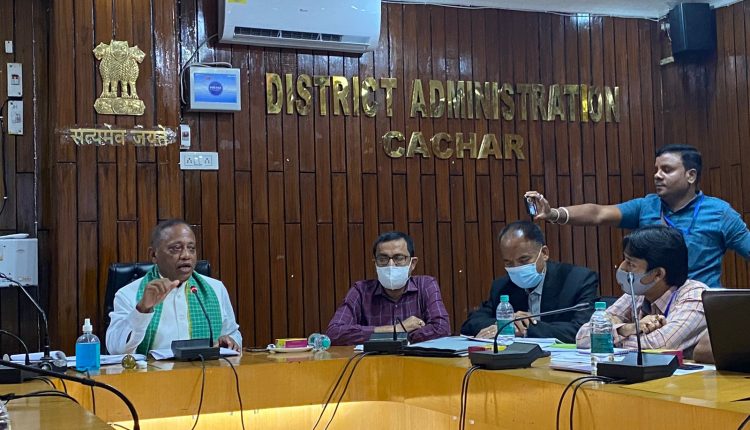 Cachar District Health Department has held a press conference to brief the media about the ‘Har Ghar Dastak’ drive. It is a massive vaccination drive that the Government of Assam had announced on November 8 and continued till November 21.

‘Har Ghar Dastak’ is a door to door campaign based on the electoral roll. Households were identified where the 100% family members are not fully or partially vaccinated. Following the identification, the doctors and other team members went to those households with mobile units and they were convinced to get vaccinated. The Department of Education, Social Welfare Department supported the drive.

The second such drive will kickstart today and continue till December 5, 2021. “Those who have resisted in the first phase, will be tried to convince this during the second phase,” informed District Media Expert, Suman Choudhury during his presentation.

16,68,968 doses have been inoculated so far while, 11,47,336 are first doses and second dose only 5,21,642. 1518 polling stations in Cachar and there are 13,27,725 voters however, 43,675 have died. 43,410 individuals have migrated out of the district and 9,728 individuals have refused the vaccine on medical grounds and 2,176 individuals denied the vaccine because they are pregnant or are breastfeeding. “While the vaccine is completely safe for the pregnant and laxative mothers but there is misinformation prevailing as they have denied the doses,” said Choudhury.

Overall, 3,178 individuals were identified who refused to get the jab without any particular reason. Also, 7,33,185 are due to get their second dose of vaccination. The task during the second phase will be to get people to the centre to get their doses.

“We are all witness to the fact that the Government of Assam as India has done its best to restrict the spread of the virus. The general public have also contributed immensely in this battle against the waves of infection,” said Minister of Forest and Environment, Excise and Fisheries, Parimal Suklabaidya.

He lauded the efforts of Government, “We have seen in the past that we had to rely on the west for vaccines, but this time, it was done in India. Moreover, the vaccination drives were conducted at the micro level. From Constituency wise vaccination drive to now GP level, it kept getting deeper and hyperlocal. Under the leadership of Prime Minister Narendra Modi and chief minister Himanta Biswa Sarma several steps have been taken which are highly appreciable,” said Minister, Parimal Suklabaidya.

He emphasised on the importance of the vaccination, “The 3178 individuals who have refused to take the dose without any reason need to understand that vaccines can save us from further contamination. Government is doing all it can and now my appeal to the people who are refusing the vaccination without any reason, to step up and get their doses,” said Suklabaidya.

He ensured that there are enough doses available for the district to get vaccinated. He addressed the anti vexers and said, “There are many who say that we are in a democratic country and it is our democratic right to refuse the vaccination. To them I would like to say, in this democracy, you also have the responsibility towards the society and by getting the doses you can do that.”