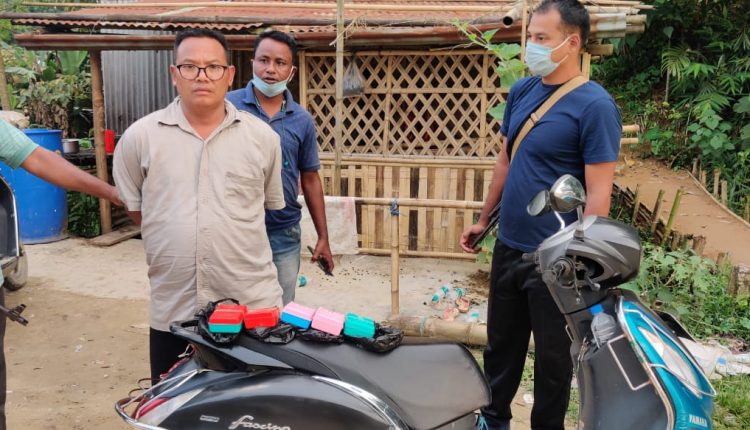 The Lakhipur Police today, with the collaboration of SDPO Lakhipur, has been able to seize illicit drugs in two separate drug busts. Both incidents happened in the Lakhipur assembly constituency under the Cachar district on Monday, July 19.

The first bust happened in the morning around 10 am at the Chotomamda area in Cachar district when, based on a secret source, a bike carrying two persons was intercepted by SDPO Lakhipur assisted by OC Jirighat and Lakhipur Police. Upon search, they recovered 6 soap cases containing 87 grams of suspected Heroin from their possession. The culprits carrying those soap cases were arrested and their names are Ginjosh Gangte (23 years) of Lalpani, Haukip Punji, and Siyaram Rabi Das (45 years) of Natun Ram Nagar.

The second bust happened around 5:30 pm when based on a secret source, a person on a scooty was intercepted by the SDPO Lakhipur along with OC Lakhipur and staff. While the culprit was coming from Jirighat towards Fulerthal, he was intercepted and on being searched, recovered 5 soap cases containing 62 grams of suspected Heroin. The name of the arrested culprit is Sanga Hmar S/O Late Thinley Hmar of Lower Lobankhal under the Lakhipur PS.

While talking to Barak Bulletin, SDPO Lakhipur Kulapradip Bhattacharjee said, “Both the anti-drug busts were carried out based on a secret tip-off. After getting intel, me and Lakhipur police waited at the location to intercept those vehicles. Upon searching, soap cases were found containing suspected Heroin. The arrested in both the cases are kept under the custody of Lakhipur police as of now and will be produced in court soon.”