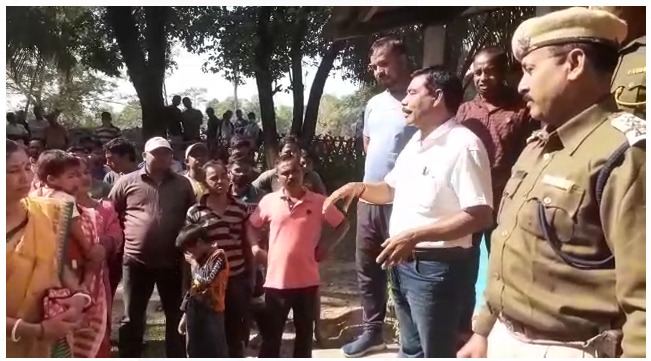 9 days since the sacred tree was cut and yet no action, locals stage protest, to hold "Maha Pujan" in Mahadev Tilla

On November 17, a traditional place of worship of the local Hindu community in Behara Dhalchara was allegedly destroyed by miscreants belonging to the Khasi community. Local people had lodged a complaint in Behara Police Outpost regarding the alleged incident.

Today, after nine days of the incident, people of the local Hindu community marched to the Behara Police outpost and handed over a deputation to arrest the miscreants behind the incident soon.

Police officials and in charge of Behara Police Outpost had a meeting with the representative of protesting residents and promised them to take legal actions against the miscreants within three days. Residents, cooperated by the activists of Vishwa Hindu Parishad, have decided to offer a special puja on the following Monday in that place. They even placed the demand to declare the Dhalchara Mahadev Tilla as a historical and sacred religious place.

The Mahadev Tilla has a banyan tree considered sacred by the Hindu Manipuri community residing in that locality. That tree was chopped allegedly by the miscreants which sparked tension in the locality. Local Hindus gather at the place on special occasions weekly and annually and worship the big banyan tree. They also condemned the ‘Christian Khasi aggression’ and demanded a probe for the incident.

“There must be a larger conspiracy behind these. Otherwise, Khasi people would not dare to do such things,” said Amar Das, the leader of Vishwa Hindu Parishad in Behara. In charge of Behara Police outpost visited the spot today, and he has asked the people of the Khasi community to come to the police station for cooperation in the investigation.

SP Cachar Ramandeep Kaur had told earlier that Cachar Police was investigating the incident and action will be taken as per law. Kalain Forest Range Officer Pinku Singh, also sent a team to the spot to investigate incident and told that if there was any offence committed according to the forest act, FIR would be lodged.

People of the local Hindu community have expressed their resentment and apprehensions about local Khasi (an indigenous community of Khasi hills) People. They consider it an act of religious aggression by Khasi, as they are followers of Christianity.