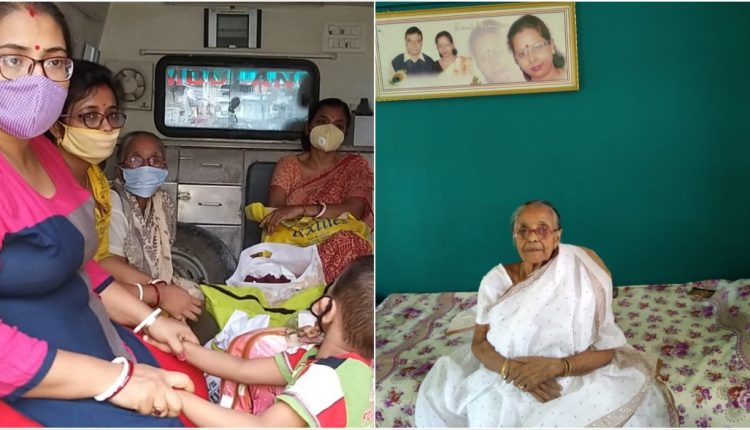 Full of life, 91-year-old, Sindhu Rani Mitra walked by herself and boarded an ambulance on the evening of July 19, 2020. As she held the door with her trembling hand and climbed up, the men in PPE stood a few feet away and watched. Giving her a hand to support was not allowed because she had tested positive for COVID19.

She was not the only one, her older son, 70-year-old, Narayan Mitra had succumbed a couple of days before and the administration cremated him somewhere in the Cachar-Dima Hasao border near Balacherra. One of Sindhu Rani Mitra’s grandson was admitted to the COVID block, another one was just transferred, the great-grandson, a 4-year-old was also in the list of positive patients along with one of her granddaughter-in-law. All of them were to get in one by one and the 4-year-old’s mother who did not have the infection too joined as she could not leave her son alone in isolation.

The ambulance, Sindhu Rani Mitra was boarding read – ‘Mrityunjoy’. She indeed defeated the fatal virus and returned home cured on July 28th. It took the mother of CPI(M), general secretary, Cachar Dulal Mitra 10 days to beat the virus at the age of 91. Now she is at home and there is no sign of COVID related issues, but there is a bigger challenge.

“We did not get enough time to explain it to her that Narayan Mitra is no more amongst us. Actually, she has been told that we had sent him to Guwahati for treatment. She keeps asking when will Naru return home,” said Dulal Mitra who is also a senior advocate in Silchar.

Naru is the name that Sindhu Rani Mitra uses to address Narayan Mitra, who died on July 16 after testing positive for COVID19. However, later the death audit board of Assam, declared that Narayan Mitra’s cause of death was not the infection caused by Coronavirus but Myasthenia Gravis. A total of nine members in the extended Mitra family tested positive for the virus and lived in isolation in the COVID wards.

“She has not even seen the dead body but we saw her crying the day Narayan Mitra died. No clue why she did so as it is clear that she is still waiting for him to return home,” Dulal Mitra added.

The family is still in the post-treatment mandatory home isolation period. “Once these seven days get over, we will have our family priest come over and perform the rituals. That is when we intend to let my mother know about my brother’s demise,” informed Mitra.

The 91-year-old is the oldest COVID19 survivor in Barak Valley. She walked into her house all by herself and this return journey on ‘Mrityunjoy’ will certainly remain as an example of strength.