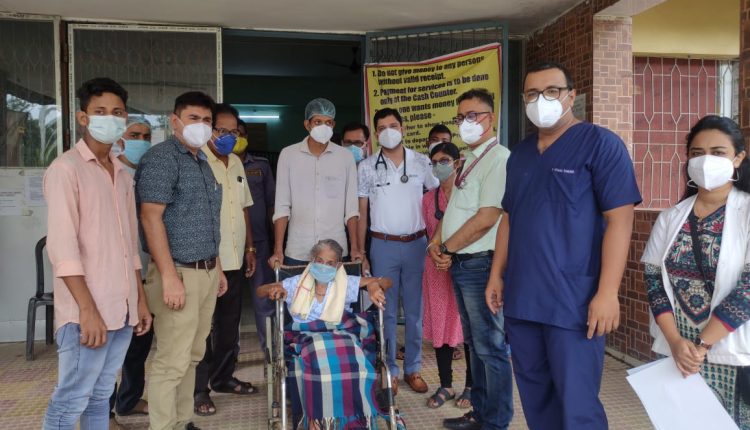 The second wave of the deadly Coronavirus has inflicted more deaths than ever before. But despite facing such a deadly challenge, thanks to the tireless work of doctors and the patients’ will to survive, many fragile and vulnerable patients have recovered and returned home safely.

Last week, a 94-year-old Covid patient got discharged home from the Silchar Medical College & Hospital (SMCH). This time, a 97-year-old woman broke that record after recovering from the Coronavirus infection. She is the oldest corona-infected patient in the history of Silchar Medical College & Hospital to return home healthy. And this feat has made the entire medical community of the SMCH quite satisfied and proud of their work, who greeted the recovered patient before leaving the hospital with a long and healthy life.

On Monday afternoon, the doctors gathered outside the Covid ward of the Silchar Medical College & Hospital to see the patient off. The recovered patient was brought out of the hospital by the health workers and family members on a stretcher. The 97-year-old recovered woman came out while thanking everyone and wished everyone good health.

According to Dr Riturag Thakuria, Jyotsna Rani Deb, a resident of Udharband, was admitted to the Silchar Medical College & Hospital on July 8 after suffering from several complications like suffocation, bone problems and including ageing issues. A rapid antigen test at the hospital found the Covid infection in her body and she was then immediately sent to the Covid Ward. There she underwent treatment and had to be kept on oxygen support at first. After 12 days of treatment, she was was able to get rid of the virus on Sunday. Along with other symptoms of her complication becoming normal, oxygen saturation also improved. Finally, on Sunday, she was transferred from the Covid ward to the general ward after which the doctors allowed her to go home on Monday.

Dr Riturag Thakuriya further said, “The patient contracted the virus at such a fragile age that it’s quite difficult and risky to treat her. Her various organs were so weak that it was getting impossible to give her oxygen support. Also, she has been suffering from Dementia for quite some time, that’s why she was also not being able to remember many things and couldn’t recognise many. Hence, we had to keep her strong not just physically but mentally as well. In this regard, the team of doctors gave their everything and thus it was possible to treat her. We are all very happy and relieved at this. How satisfying it is for a doctor to see a patient recover might not be obvious to all. We wish her a long life ahead.”

In September last year, a 100-year-old woman in Tezpur recovered from the coronavirus after which the then Health Minister Himanta Biswa Sarma visited her in person. In the second wave, Jyotsna Rani Das is probably the oldest patient in the state who successfully recovered from the coronavirus and came back home. That day before Jyotsna Rani Das was sent home, in a small felicitation program, apart from Dr Riturag Thakuriya, others present there were Dr Bikash Shandilya, Dr Prosenjit Ghosh, Dr Amit Kalwar, Dr Nabaruna Paul.

The son of Jyotsna Rani Das became emotional while talking to the doctors before taking his mother back home. “I don’t think there is any other better treatment like Silchar Medical College & Hospital in the Barak Valley. I have seen with my own eyes the way doctors and health workers treated my mother with care,” he said in tears. “I am forever indebted to them and do not have the proper words to express my feelings. Only those who witness might realize how much they work for the patient in difficult times. I would say to society, in these difficult times, learn to respect the health workers and the doctors. ”

Most of the critical patients in the Barak Valley have been treated at the Silchar Medical College & Hospital with many elderly people returning home healthy. At one point, the death rate was so high that doctors were terrified. After the second wave suddenly hit, the ICU beds at the Silchar Medical College & Hospital were immediately extended by the government. Even after having 100 beds, at one time, there was no space left for any more patients and the government then planned to add 40 more ICU beds to the hospital. However, the situation then slowly came under control and now there are often days when not a single death is being reported due to the Corona which suggests that the SMCH has come a long way. There is a strong possibility of a third wave hitting across the country, and doctors at the Silchar Medical College & Hospital are already mentally preparing for it. Even amid so much rush, when any critical patient recovers in this way, the doctors get a little more encouragement and motivation at work.