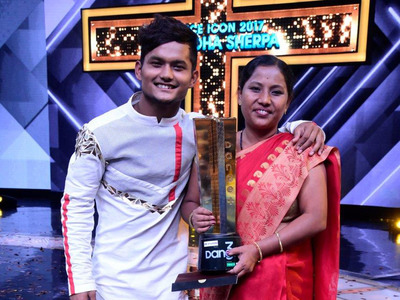 While every young mind builds up a dream very few come true. We might not have a foolproof formula to success but believe in your dreams definitely takes you places. Silchar boy Bir Radha Sherpa is a living example of this. The 18-year-old changed his own fate by winning Star Plus’ popular reality show Dance Plus 3 last year. The victory did not distract him and he went on to prove his mettle in another one. His utmost dedication and passion, along with the love of his fans helped him achieve the title of Dance Champions, another show on Star India’s general entertainment channel.

While Dance Plus 3 tested skills of young dancers, wanting to prove themselves, Dance Champions was a tougher stage, wherein winners and runners-up of dance reality shows across channels (Jhalak Dikhhla Jaa, Nach Baliye, Dance India Dance) came together. The young boy, week after week proved his grit and emerged as the ultimate champion. Blessed with the art, Bir trained himself in one of a kind mix of b-boying and contemporary style, making him stand out among the other challengers.

The Silchar resident is very close to his mother and time and again in media interviews mentioned how his mother’s support helped him spread his wings. While most youngsters after tasting success and fame would run after money, Bir maintained that he wants to train himself further in order to build himself as a global success.

Barak Bulletin (My Silchar) got the opportunity to interact with Bir after he qualified to the finale of Dance Plus in 2017. His innocence and struggle touched our hearts. With no formal training available in the region, Bir used to watch YouTube videos and practice to polish his skills. He did not let the lack of opportunities ever dissuade him, as he was determined he wanted to make it big.

In an exclusive chat with My Silchar, he shared that many have approached him seeking help. But he suggests that each one should live their own journey. “When I started I had no one and that gave me more strength. We are from Assam, and each one of us have the power to achieve a lot. One doesn’t need a godfather to make their dreams come true, all they need are hard work and dedication,” Bir concludes.