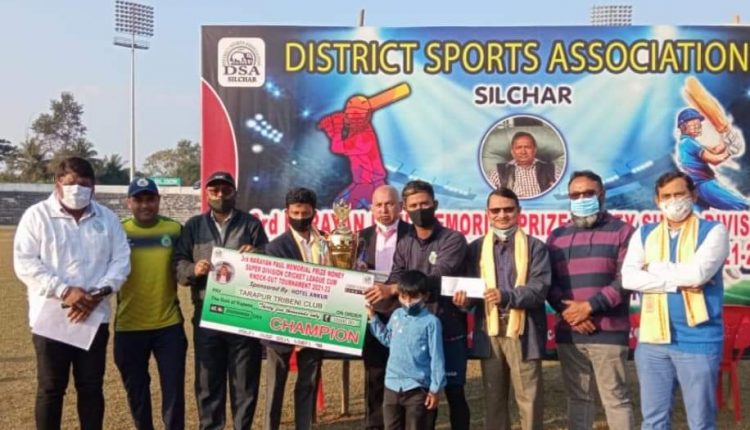 It was a big match and the big players had to rise up to the occasion. In a big Super Division final, India Club captain Raihan Jomeel Mazumder won the toss and decided to bowl first. Nihar Paul bowled a dream spell in the semi-finals and Mazumder was expecting the same. Jogeshwar Bhumij gave India Club an early breakthrough by sending Krishanu Dutta (2) to the pavilion. Subham Mandal walked in and with both left-handers on the pitch, Nihar Paul’s swing became ineffective.

After the first spell, it was left to the spinners and this is where the India Club got exposed on the day. Tribeni captain, Abhishek Thakuri who is in great form got off to a good start. But as great players do, it was time to convert the good start to a great inning. With Subham Mandal, he started stitching a partnership. The India Club spinners were all T-20 specialists. They bowled fast and with less revolution and no drift, they were just a cakewalk for Abhishek Thakuri.

Mandal (35) lost his wicket to Shekhar Jyoti Barman but by then, Thakuri had already scored a century. Barman picked the wicket of Amit Yadav too. He missed the support that young Parvej Musaraf provided from the other end. India Club conceded 258 runs in their 40 overs and could only pick up three wickets.

The highlight of the inning and much of the entire tournament was Abhishek Thakuri. He scored 163 runs of 139 balls with the help of 14 boundaries and nine sixes. He remained not out and in fact, ended the innings with a huge six.

Chasing a big total, India Club needed a big start. Again, this is where they missed Parvej Musaraf. In the do or die league match against Yogayog Sangha where India Club had to win with a big margin, Musaraf scored 40 of just 19 balls. Such is Musaraf’s class.

Pradeep Sarkar opened the innings with his new partner Arman Khan. In the second over itself, Sarkar scored a couple of boundaries to make it clear that India Club will bat with intent. Arman Khan lost his wicket to Raj Bhowmick for just six. Young Prashant Kumar (15) too could not provide any support to Sarkar. Then came Chiranjib Dey with the big breakthrough. The left-arm spinner bowled Pradip Sarkar for 37. Dey then picked the wicket of Neeraj Sharma and it was just a matter of time before Abhishek Thakuri picked up the winner’s trophy.

India Club played out their 40 overs, but after the dismissal of Pradip Sarkar, it wasn’t much of a challenge for Tribeni. India Club’s innings ended for just 149 runs. Tribeni Club that qualified from the First Division to play the Super Division in 2022, won the match by 109 run to become the Super Division champions for the first time.

With 410 runs Abhishek Thakuri was the top batter in the tournament. Chandrip Das and Ram Chandra Das both picked 11 wickets but Chandrip with a better economy rate held the pole position in the list of top bowlers. Because of his all-round performance, Amit Yadav was adjudged the player of the tournament, he picked eight wickets and scored 271 runs with the bat.

"Individual" moves to District Court against Assam Olympic Association for…