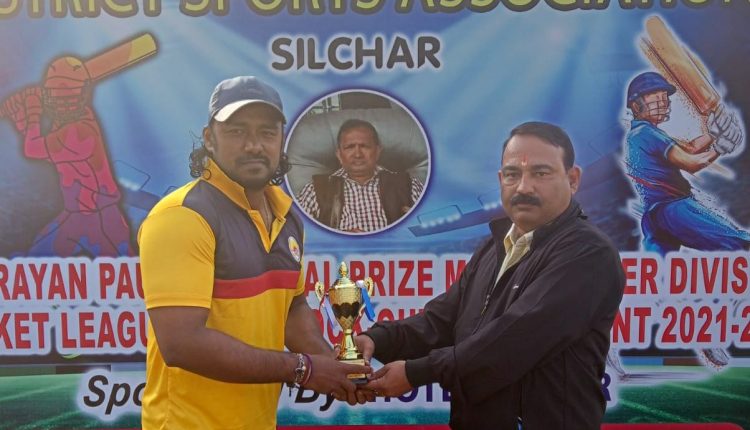 The iconic team, Town Club has lost its shine over the years when it comes to cricket. In the recently concluded Assam Premier Club Cup – Silchar region, the Town Club could even pose a challenge to arched rivals India Club. So, when the Super Division tournament organised by Silchar DSA kickstarted, not many gave Town Club a chance. But they are making a case.

After defeating defending champions United Club in their first match of the summit, Town Club has secured another mammoth victory against newly promoted to Super Division – Tribeni.

Going against the trend, Town Club captain Ram Chandra Das decided to bat first after winning the toss. While many teams failed to survive the early hours at Satindra Mohan Dev Stadium, Das (38) stitched a quality batting partnership with Abhitab Paul who scored 87 runs and remained not out. The opening partnership laid the partnership for Silchar Town Club to put a big score on the board which they did. Mujibur Ali’s 35 and Shambu Roy 23-run cameo helped Town Club set a target of 213 runs for Tribeni. Ankit Agarwal picked two wickets while Raj Bhowmick and Amit Yadav bagged one each.

To chase 213, Tribeni needed a good opening partnership. Krishnendu Das was bowled for a duck by Sourabh Kumar Singh and another opener Krishanu Dutta went to the pavilion after scoring only five runs out of 10 balls. Batting at number three, Amit Yadav tried to rebuild the innings but got no support from the other end. State cricketer Abhishek Thakuri, who is had a decent season playing for Assam failed to play up to his potential. Tribeni captain for the day, Thakuri was sent to the pavilion by Town Club skipper Ram Chandra Das for just three runs after playing 14 balls. Yadav’s 79-ball 70 is the only positive for Tribeni from the last couple of matches the team has played in the Super Division. Anurag Sinha picked three wickets for Town Club while Sourabh Kumar Singh, Shambu Roy, Ram Chandra Das, Mujibur Ali, Biki Roy, Yasir Ali picked one wicket each. Abhitab Paul was awarded the man of the match for his quality batting display.

After two matches, Town Club finds itself at the second position in the points table while Samik Das’ Itkhola AC leads with the same number of wins but a better run rate. The top four teams will qualify for the semi-finals.