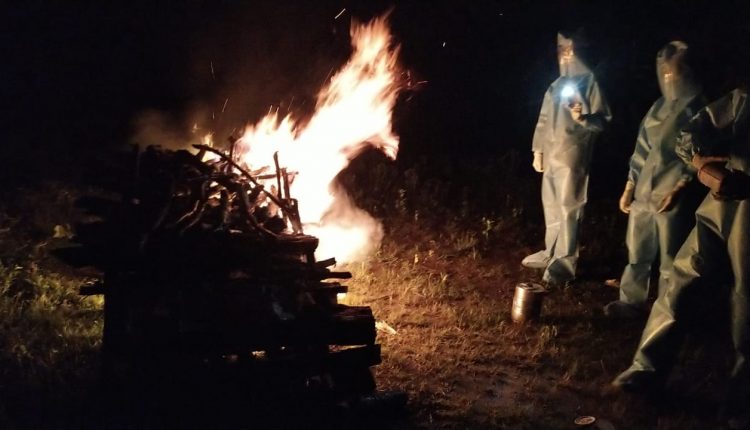 Today morning, 70-year-old businessman, Janiganj resident Narayan Mitra breathed his last at Silchar Medical College and Hospital. He was suffering from respiratory issues and was under the treatment of a “private doctor.” As his condition deteriorated yesterday, he was referred to SMCH. After reaching SMCH his oxygen level dropped and he was immediately put on a ventilator. As there was very little time and his condition was unstable, the doctors in the SMCG could not collect swab samples before admission but did so while Narayan Mitra was in life support. Mitra tested COVID positive and post his demise, the officials from District Administration said they will handle the cremation.

As per available information, volunteers of Rising Youth Society NGO who were trained under the Aapda Mitra project of NDRF left with the body for cremation in an isolated area in Cachar-Dima Hasao border near Balacherra. Media Expert, District Health Department, Suman Choudhury said in a press statement, “Late Narayan Mitra’s immediate family members have been placed under quarantine, but his relatives will accompany the team and the cremation will be done following all rituals.”

Late Narayan Mitra’s brother, Dulal Mirta who is also the Cachar – general secretary of CPI(M), however, contradicted Choudhury’s statement. While talking to Barak Bulletin, Mitra said that the administration has clearly denied any participation of the family members in cremation.

Mitra also added that Narayan Mitra’s son Abhijeet Mitra has tested COVID positive and is now being treated in the COVID block. “My samples tested negative, the rest of the family members and people who could have possibly come in contact with late Narayan Mitra will be tested from tomorrow onwards.”

Vice Principal of Silchar Medical College and Hospital confirmed that Abhijeet Mitra has tested positive and no infection was detected in the swab sample of advocate and CPI(M) leader.