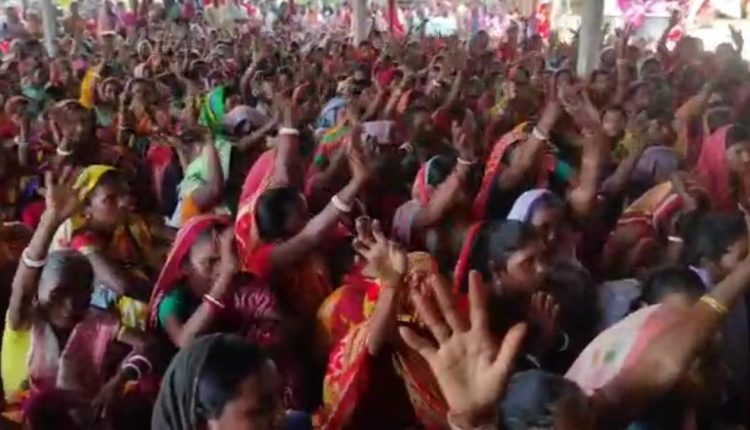 The demarcation of land for the proposed Dolu Greenfield Airport was deferred due to mass mobilisation and protests by tea estate workers. District administration of Cachar went to Dolu tea estate to demarcate the land to be acquired for an airfield alongwith almost 500 police personnel armed with riot gear, but considering the huge gathering of local tea estate workers against the move, the district administration decided not to demarcate the land instead retract.

The laborers of Doloo tea estate had protested against the demarcation process just a few days back, and since then the local labor union named Asom Majuri Shramik Union had been campaigning and mobilising the local workers against the proposed move by the district administration.

The authority of Dolu tea estate (Dolu Tea Estate Private Limited) reached a treaty on March 8 this year with the labor unions like Barak Valley Cha Shramik Union, BVCMS, and Central Indian Trade Union for acquiring land for a proposed Airfield that was supposed to be made in place of Doloo tea Estate.

The Memorandum of Understanding (MoU) signed under the leadership of Silchar MP Dr. Rajdeep Roy, paved the way for the acquisition of 2500 bighas of land from Dolu tea Estate for the construction of Green Airfield in Barak Valley.

The MoU promised job security for the evicted families for the said acquisition, it also promised to pay the entire due, gratuity in return for the consent for land acquisition.

“We are not educated enough to understand what has been written in the treaty in English, but we will not be deceived by the governmental promises. This is the only means of our livelihood, we will not let it go away,” told one agitator who joined the mass gathering at Dolu.

“Once we give away our land government will not keep its promise, they calculate one step ahead of us, so we do not agree to the treaty and government proposal”, he added.

On January 20 this year, Assam Chief Minister Dr. Himanta Biswa Sharma announced the construction of a new airfield in Dolu Tea Garden. The proposal was cleared by the Aviation Ministry of India.