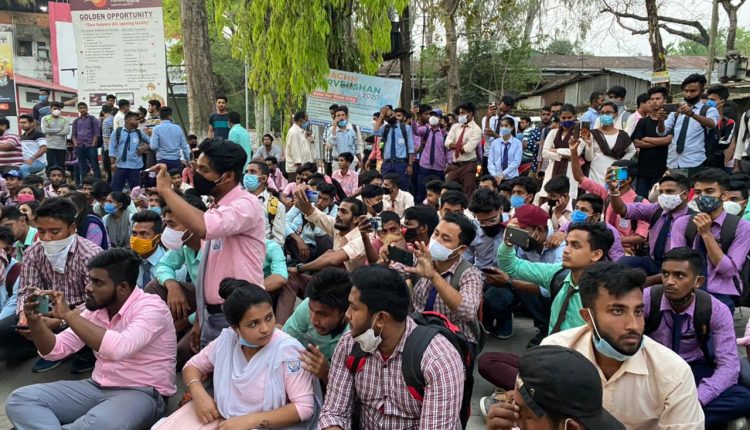 Students of colleges affiliated with Assam University Silchar have been protesting since the last three days in the city. Their demand is that the University must conduct the examinations online as it is doing for the students enrolled directly with the University.

An emergent meeting was called at the deputy commissioner’s office today to find a solution. Principals of all the colleges in Cachar district was invited to the meeting along with Registrar of Assam University Silchar.

Additional deputy commissioner, Dipak Jidung, Circle Officer Silchar Sadar Biswajit Saikia and around 10 students attended the meeting. Jidung shared that in the meeting it was unanimously decided that the examination will be conducted offline as scheduled.

Biswajit Saikia added that the district administration’s concern is the law and order situation. He said “How the University must conduct an examination is something that the university administration will decide. We organised the meeting to give students a platform where they can raise their issues.”

After the meeting, it was communicated to the agitating students that it has been unanimously decided that the University will conduct the examination offline and as per the schedule.

As this news broke, the agitating students got irked and the protest grew louder. More than hundred students sat in front of the main gate of deputy commissioner’s office. Until their demands are met, they said, they won’t let any car drive out of the office. The registrar, principals are now waiting at the office.

Additional superintendent of Police Jagadish Das, OC Silchar Sadar, Ditumoni Goswami and other senior officials of Assam Police are at the spot. A fire engine has been called by the administration.