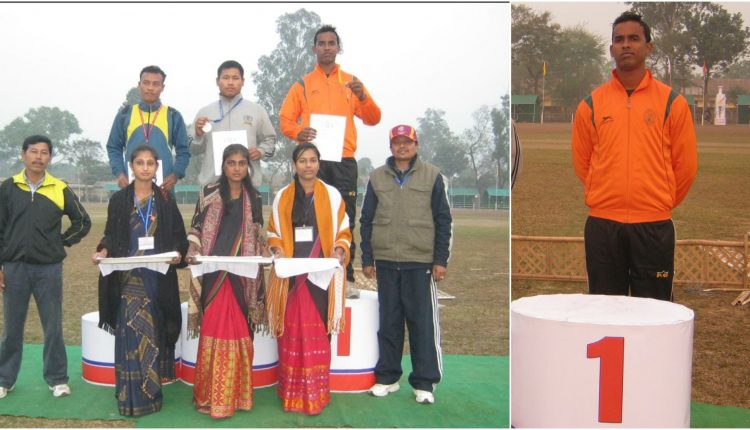 After winning gold for Assam in National games, athlete Pintu Ram of Barak Valley is struggling without a job

Back in 2004-05, he was studying in Class VII when former administration, Satyajit Das spotted hidden gems in him. Holding Satyajit Das’ hand, Badarpur boy, Pintu Ram moved to Silchar and started training. Pintu Ram started catching the eyeballs of many with exceptional performances in Discus Throw and Shot Put both Olympic games.

He started representing the Silchar team and took baby steps towards the podium finish. As he mastered his skills, he started making headlines. Wearing the jersey of Silchar DSA, Pintu Ram won seven medals – six gold and one silver. In the Jharkhand National Games, Ram represented Assam in Discus Throw and bagged a Gold. He still recalls that as his best performance at the National level.

He was also picked for the Mysore National Games where he secured the fifth position while throwing for Assam. Athletes of Pintu Ram’s class are few and far in Barak Valley. It takes a lot of grit and determination to reach the levels Pintu has. It comes wrapped with sacrifices. Pintu was traveling from one district to another while his friends were sitting at private tuition and excelling in their studies. They have got jobs and are doing well however, 35-year-old Pintu Ram is finding it difficult to make ends meet.

When a player commits his life to an Olympic sport, it is a commitment to the country. Athletics never gets the limelight, but there are multiple government initiatives that secure the lives of athletes. The sacrifices during their career must be honored once they have retired. It hardly happens in Barak Valley. Pintu Ram got nothing apart from a few assurances.

The athlete didn’t get a job in any of the government institutions. He was working at a Private School as Sports Teacher, but due to Coronavirus induced pandemic, that post got abolished. Now, the dark cloud of a chronic financial crisis looms large over his head. “I did give my biodata to many, but nothing happened. So, I feel betrayed,” says Ram. He gave it his all when he threw the 7.26 kg heavy metal “shot” to bring glory to the state, but in return got betrayal.

“Young aspirants of the sport can see my condition and how I am left with nothing at this age. This demotivates them big time. This is not how you treat sportsmen and if it continues, hardly anyone will commit to Athletics,” adds the multiple award winner Pintu Ram.

When Pintu Ram was at his peak, Gautam Roy was one of the tallest politicians in Barak Valley. Multiple meetings with the former Congressman did not fetch any support. Pintu Ram also adds that he has met Sushmita Dev when she was a member of parliament and she had assured him that she would refer his profile. “Did not get any response from there either,” says Ram.

Now, should an Athlete of Pintu Ram’s stature, who has had multiple podium finishes and helped hold the state’s flag high, run from post to pillar in search of a job? District Sports Officer has a huge office in each district. A part of their job is human resources. Their salaries come from taxpayers’ money, and when people like Pintu Ram talk about financial crises, the question arises, where is the government wasting taxpayers’ money and for what? Ram concludes by saying, he is not the only one, there could be more and at the same time, there are some who have got government jobs with profiles half as good as his. Such is the poison behind the panacea that is Sports.

Set Back For Football Fans: Silchar Knocked Out of Khirode Baarua Inter-District…

Pritam Das, Rahul Singh, Abhishek Thakuri in Assam’s team; “They are our pride,”…