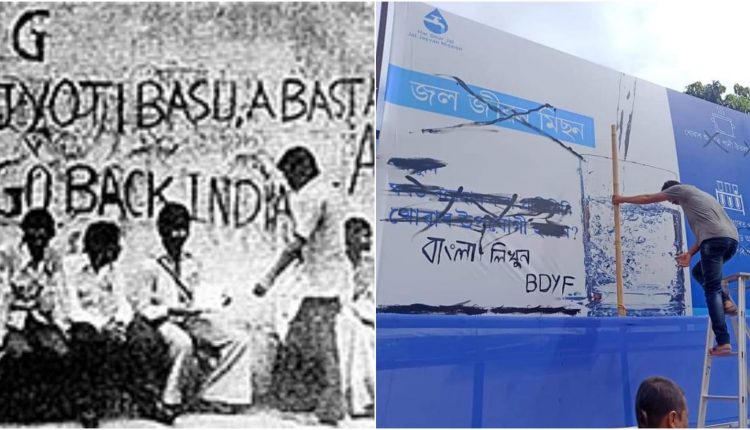 At the very outset, I must unequivocally condemn the defacing of an Assamese banner in Silchar. In a democracy, we have the right to protest but we certainly do not have the authority to be disrespectful towards any other community or language. We would surely not appreciate it if such a treatment is meted to any signage or banner written in Bengali in any part of the world. So, why should we do the same to anyone else?

Having said the above, we must also analyse whether the incident in question was an unprovoked act of jingoism or linguistic sub-nationalism or was it an expression of anger and frustration which had accumulated over the years due to the repetition of such acts by the government as well as private machineries?

According to the Assam Official Language Act, 1961 Bengali is supposed to be the official language of the then undivided Cachar (now divided into Cachar, Karimganj and Hailakandi). However, this important language provision impacting about 40 lakh residents of the state is often ignored, mostly unintentionally and sometimes intentionally as well.

Even during the rule of the earlier regime under Tarun Gogoi, many government posters in Assamese could be seen outside state government offices in Silchar and the trend has continued to this day. From mobile phone caller tunes to Covid 19 vaccination certificates and signages on bank ATMs, this language rule is flouted by both governments as well as non-government entities with impunity regularly.

During my journeys to the Brahmaputra valley, I have often faced this question from the people there as to why the people of Barak Valley refuse to learn or speak Assamese? This question primarily emerges out of ignorance about the history of the region. There is absolutely no knowledge about the fact that the Barak and the Brahmaputra valleys never had any linguistic or cultural affinity with each other. They are also geographically divided by the Borail ranges. The current political boundaries were created by the British and did not exist before their arrival.

On expected lines, the incident has been aggressively taken up by the mainstream Assamese media as well as social media influencers. While one channel put a headline, “Axomot Bangaligiri”, another one claimed, “Silcharot aakou opomanito hol Axomiya bhasha”. One tweet shouted that since Cachar was the seat of the Dimasa kingdom, either Dimasa or Assamese should be the official language here. Another tweet opined that those refusing to accept Assamese should be ‘’booted out”.

This hatred primarily emanates from the false narrative that all Bengali speakers in Assam are migrants. There is little knowledge about the fact that the official language of the Dimasa court was also Bengali and the last Dimasa king Raja Govindachandra himself wrote in Bengali. In the plain areas of his kingdom, most of his subjects were Bengalis and many Manipuris were also settled here. Therefore, there has never been any conflict among the core communities which have resided together in Barak Valley for ages – the Bengalis, the Manipuris and the Dimasas apart from others.

However, these aspects are almost intentionally not conveyed to the larger population in Assam because then the broad political narrative that all Bengalis are outsiders and are a threat to the indigenous communities will get deflated. Many political parties and their leaders will lose their relevance.

Characters like Shrinkhal Chaliha or his cronies are also a result of this very ignorance, deliberately fostered over the years by the powers that be. In addition, when such hate speech emanating from the Brahmaputra valley is ignored by the law and order machinery and those speaking for their language in Barak Valley are immediately put behind bars, the whole scenario does reek of administrative partisanship as well.

I must add that in such a situation, the political leadership of the valley has also miserably failed. Silchar MP’s statement that Bengali is a ‘sahajogi bhasha’ in Barak valley has created a storm. It is unfortunate that these leaders do not feel answerable to their voters. Rather they toe the line of the leaders in Dispur to ensure that their political aspirations are not impacted. Rajya Sabha MP Sushmita Dev was also expected to be more vocal about the issue especially after joining the Bengal-centric Trinamool Congress, but even that has not happened. While they must denounce any act of vandalism or defacement, they should also not hesitate to speak for their people for their legitimate rights and sentiments.

The intellectual class of Barak Valley has also, unfortunately, lost this battle. We haven’t published enough books or produced enough documentaries at the national or international levels about our origin and history meekly surrendering to the ultra-nationalist narrative. We need to create a lot more content that can document our history and cater to a large readership. Knowledge, at the end of the day, is the answer to most such challenges.

In order to ensure that such incidents do not happen again and again, honest attempts have to be made to build more bridges of bonhomie and togetherness between the Brahmaputra and the Barak valleys. Let the students of one valley travel to the other in cultural exchange programmes. Let Barak Valley’s history also be a part of the school curriculum in the state and most importantly, let the Bengalis of Barak Valley have their own space to speak, read and write in their own language without the fear of persecution or the continuous challenge of proving their nationality.
No Bengali who loves his own mother tongue would disrespect the Assamese language. We are also as proud of the legacy of Bhupen Hazarika as anyone else is. We just want the right to live with dignity in our own land, that is, Barak Valley. Let their be no more defacements or vandalism but let there be no more flouting of the language act as well !!

Shifting of zonal offices of bank from Silchar to elsewhere: The points of…