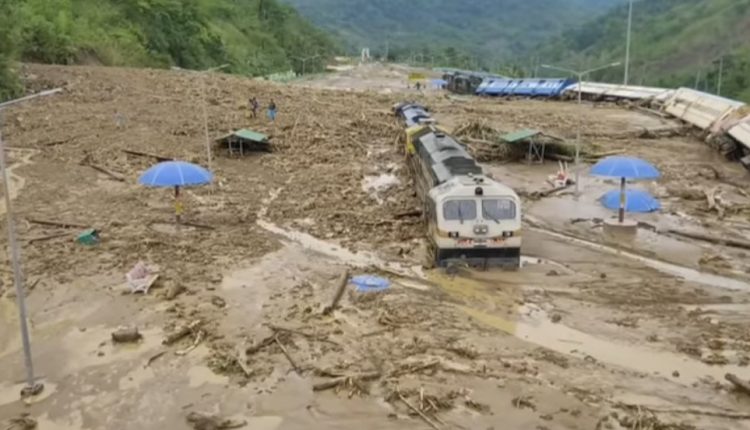 Alternate rail-route for the people of Barak Valley is a necessity, Greenfield airport is a luxury

Assam has been facing havoc due to pre-monsoon heavy rainfall, many parts of Assam are inundated, and people are aware of the flood situation in the state. People are also aware of the agony that grips the common people in Assam every year. In this context, there are certain questions that keep coming to my mind. But before sliding into that, I want to share some of my lived experiences, which may help us measure what is significant to us while facing such a situation. When we got stranded at Halflong, a sense of uncertainty engulfed our thought process; we were at a loss and were wondering what might happen next. How would we go back to our own place? When the government announced evacuation using the air force, we were told to enroll our name with the PNR number of the train ticket.

On the first day, we were directed to go to the Assam rifles ground, but the chopper didn’t arrive. The next day we were told to go to a particular school where there’s a makeshift helipad, but the helicopter didn’t come that day as well, and we were very disappointed. On the third day, when our expectations were least, we saw the helicopter arriving. We didn’t have luggage with us; we were just thinking about leaving the place safely; there were almost 350 people stranded there. The helicopter could carry only 17 persons at a time; they evacuated all the elderly persons and ill persons on the first go. Then one large helicopter arrived where 35 people could sit.

Yet the space was not enough. We had to sit on the floor. Few of the stranded people started walking towards Damcherra station; they walked almost 9 km on foot and arrived at Damcherra station. There they requested the station master to manage one engine from Badarpur to take them back. The stranded train passengers and authorities also had to evacuate lots of other people and those who had to leave the area facing the calamitous situation.

We all know what happened at Haflong station. For those boys who started walking towards Damcherra, an engine was sent to take them back to Badarpur. The government had extended their cooperation in every possible way, The stranded passengers had to stay back at the school for the day, and authorities provided food for them in the school where they were staying.

We boarded the train on Friday night, and by Saturday early morning, we reached Haflong. Our train was halted for more than 2 hours at Haflong, and we were still unaware of what was waiting for us ahead. The rail authority informed us that the train could not move ahead because of landslides so that we would be taken back to Guwahati. When the train reached Migren Disa, the train was again stopped, and authorities informed the passengers that the train could not move as the tracks were damaged. The passengers were getting anxious; some of them went to the station master and started arguing, then the authority again decided to drop us at Haflong. And what happened next is known to us all. We got stuck at Ditokcherra

I have seen many hopeless, helpless faces during that time; I have seen faces gripped with fear and uncertainty; I was not quite afraid; I just accepted that I’d face the same fate as others. I have also seen people breaking down out of anxiety. And which compelled me to ponder on a few obvious questions.

People are enthralled about the Greenfield Airport in Dolu Tea Estate; as someone hailing from that valley, I too wanted that, I specifically emphasise on the  word ‘wanted’ that. Recent events warranted me to rethink what is a necessity and what is a luxury. Basically, what is a Dal rice and what is Biriyani. Isn’t the renovation of the railway track more necessary than the Greenfield Airport? The airport would be useful for a handful of wealthy people, but the railway track will be useful for the larger population.

The railway authority says it will take almost one and half months to restore the rail connectivity in the Hill area. Still, many expressed their doubts seeing what visuals were coming from the ground. At this juncture, it would have been better had there been an alternative railway route, but the people of Barak Valley prefer an airport to a railway track. But at this moment, we don’t need another luxury airport; we need what is very basic to us, an all-season undisrupted road and railway connectivity to Barak Valley.

The author of this article, Jayanta Choudhury is a resident of Barak Valley who got stranded at Ditokcherra Railway Station for hours.