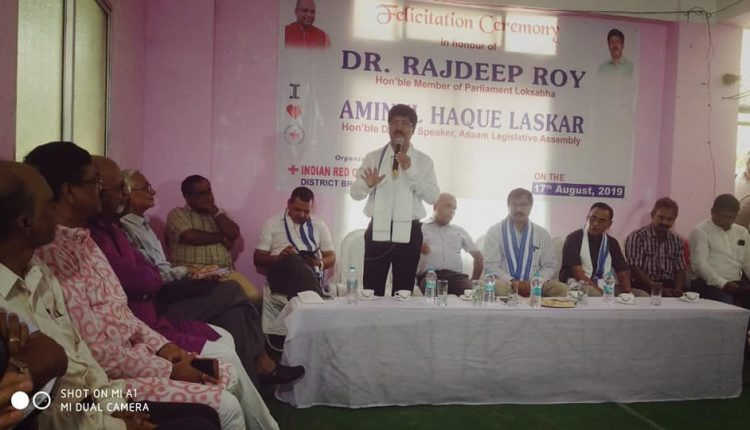 By barakbulletin On August 17, 2019 - 11:14 pm
Share
Newly-appointed deputy speaker of Assam, Sonai MLA, Aminul Haque Laskar announced that he will donate Rs 10 lakh to Red Cross Hospital while Silchar MP, Rajdeep Roy committed Rs 20 lakh. Today afternoon, Laskar and Rajdeep Roy were felicitated by the Red Cross Society. Both Roy and Laskar attended the event and spoke about the importance of the Red Cross Hospital.
Aminul Haque Laskar said that Red Cross works for the benefit of the common people who cannot afford treatment in a private nursing home. He said, “I am committing that I will donate Rs 5 lakh myself and Rs 5 lakh from the deputy speaker’s fund. I hope this money helps the society to develop infrastructure and benefit people.”

Rajdeep Roy applauded Aminul Haque Laskar’s decision to donate Rs 10 lakh for the benefit of the Red Cross Hospital. He said that despite being a member of the Red Cross Society he could not actively involve himself that due to various professional obligations. But going forward he would like to help Red Cross grow further, “I am happy with the way Red Cross developed itself as such a good pace. Having said so, I would like to see it growing further at a better growth rate and will definitely help it to do so. MPs have certain funds and if those are not withdrawn by the prime minister, I commit to donating Rs 20 lakh to the society,” he added.
Akhil Chandra Paul, Babul Hore, Kaushik Rai and many other dignitaries attended felicitation event held in Red Cross Society’s Silchar branch.