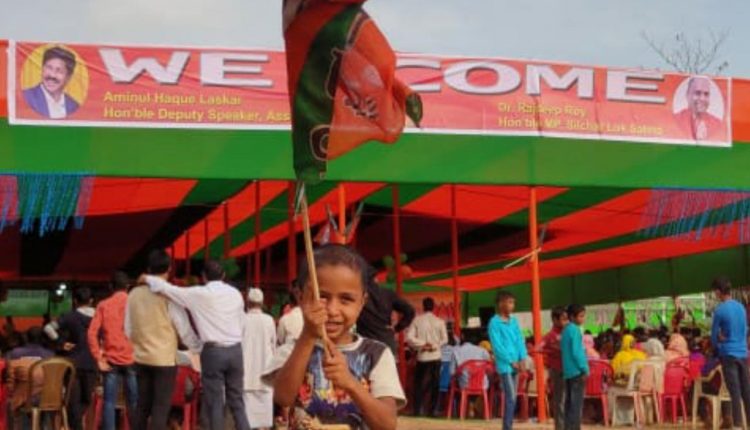 Aminul Haque Laskar is again going to contest the 2021 Assam Assembly elections as a BJP candidate in Sonai constituency. The BJP is looking for qualified candidates from the minority community in at least three more seats in Barak Valley. If they’re able to find competent ones then they will definitely be nominated and sent to the assembly after winning the next elections, announced Rajdeep Roy, General Secretary of BJP State Committee cum Silchar MP. He made the remarks while attending a meeting at Auliya Bazar in Uttar Krishnapur area of Sonai on Sunday. About five hundred workers from different parties including the Congress joined the BJP in his presence.

Speaking on the occasion, Rajdeep Roy accused the Congress and the AIUDF of forging an alliance. He said, “Congress and AIUDF are trying to furtively ally with each other in Barak Valley and other Bengali inhabited areas of the state. There is a long list of happenings to reinforce this statement. They tried to join forces in the recently concluded BTC elections but couldn’t succeed in their efforts. We have previously seen that the AIUDF did not field candidates in Silchar elections for making the Congress win but didn’t succeed there too. They have repeatedly tried to portray BJP as a party solely for the Hindus, but they are actually the ones who are sectarian in nature. The BJP not only made Aminul Haque Laskar contest the elections but gave him an important post. Very few people of Barak Valley became deputy speakers of the assembly. We have decided that Aminul Haque Laskar will be the BJP candidate for Sonai constituency in next elections again and he will win with votes more than before.”

He claimed that Aminul Haque Laskar is the most successful MLA in the history of Sonai. During his tenure, Sonai underwent a rapid infrastructural change and the hospitality between people also increased. He said “Sonai never saw such rapid progress in the last seventy years. It is because BJP is focused on development policitics and not communalism. This has been proven in the last five years and that is why the opposition is bluffung at us with baseless allegations. In the last elections, we won six seats in Cachar but this time our candidates will win all the seats. In the last five years, 2,500 crore rupees was spent only for the betterment of roads in Barak Valley alone, of which rupees 228 crore was spent on the roads of Sonai, a rare feat not only in Assam but across India. No matter what the opposition says, people understand what we are doing and that is why they will again vote for BJP candidates. This time we will show everyone that development is our priority unlike the opposition which is focused on politics of hatred and communalism.”

Deputy Speaker Aminul Haque Laskar claimed that after Moinul Hoque Choudhury, he is the most successful MLA in Sonai with the support of masses. Besides, he also showed cited various instances to prove how the Congress party is anti-Muslim and communal. “Ordinary people understand these things and that is why when Sushmita Dev visits Sonai she faces public outrage” added the deputy speaker.