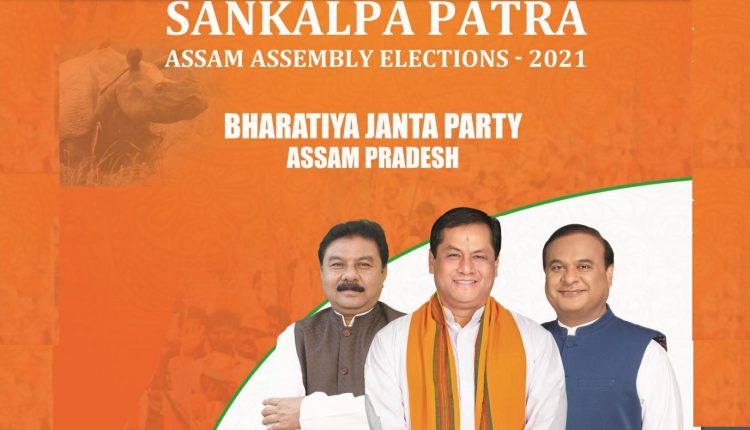 An analysis of BJP's Manifesto - What does the future hold for the people of Barak Valley?

Issac Asimov, a renowned scientist, and a prolific writer, once wrote in an essay titled ” Cult of Ignorance “-
“There is a cult of ignorance in the United States, and there has always been. The strain of anti-intellectualism has been a constant thread winding its way through our political and cultural life, nurtured by the false notion that democracy means that ‘my ignorance is just as good as your knowledge”.

The Bharatiya Janata Party must have relied on a similar ‘cult of ignorance’ among the voters of Barak Valley while releasing its manifesto for the 2021 polls. The assumption of our knowledge being as good as our ignorance is not entirely misplaced, especially in the context of Barak Valley.

As Dr. Himanta Biswa Sharma has been repeatedly pointing out, ” It is a battle of civilizations.” One can assume that the party must have considered that while a clash of civilisations is unfolding, promises made in the past should be of least concern to the voters of Barak Valley. The battle of civilizations, we are told, is poised against the supremo of a regional party who is contesting in 24 out of 126 seats in the entire state. The narrative, as is becoming evident, is about stopping a party whose seat share, even if they win all the seats that they are contesting, will still be less than 20%. In times of such vulgar absurdity, nothing yet everything is laughable.

“Do you want Ajmal as your CM? “- roared Dr. Himanta Biswa Sharma at an election rally, clearly etching out the fulcrum around which the ’21 polls will revolve. While the electoral genius of Dr. Himanta Biswa Sharma is well recognised, the hoax of Badaruddin Ajmal becoming CM while. contesting 24 seats must be based on his assumption of the same ‘cult of ignorance’, Asimov so poignantly wrote about.

Before we delve into the recently released poll manifesto by the BJP, let us analyse the vision document released by the BJP in the run up to the 2016 elections. One can download the Vision Document and punch in the keyword ” BARAK.” The quickfire search result reveals as many as 21 specific promises for the Barak Valley. When the BJP released its Vision Document in 2016, many rejoiced a marked change in approach towards the languishing Barak Valley. The Chief Minister’s repeated assurance of his commitment to all-around development of” Barak Bramhaputra Pahar Bhoyam” instilled hope and confidence among the citizens of Barak Valley.
Five years, down the line, let us see how many of such promises have been fulfilled.

Promise -2 Constituting a Barak Board in line with Bramhaputra Board

While implementation of Assam Accord, strengthening Namghars, task force to recover land of Satras, granting aids upto ₹2.5 lakh to all Namghars and places of worship of tribals, construction of Bir Bhagadatta Khetra, Mahasati Joymati Khetra, 42 Maidams in memory of Ahom Kings, doubling the grants to Assam Sahitya Sabha, etc have found a place in the manifesto, all of the aforementioned promises made to Barak Valley have been completely forgotten. Revival of HPC, a promise made by none other than the Honourable Prime Minister of India, has been brushed under the carpet too. To our utter dismay, a promise has been made to revive the Jagiroad Paper Mill but not a single word has been offered on the Cachar Paper Mill. If this is not a blatant example partisan approach towards Barak Valley, one doesn’t know what is!

With respect to infrastructure development, the following promises have been made to Barak Valley –

2) Infrastructure for growth of fisheries in Barak Valley

3) Establishing a mega SEZ near Silchar.

Why the previous promises for Barak Valley have been trampled by a new set of promises is very difficult to understand.

There are certain promises which are expected to auger well with the voters –
1) Free Bicycles to children from Class 8 onwards
2)Under the ORUNODOI scheme, 30 lakh families to be brought under it’s ambit and the amount will be increased from ₹830 to ₹3000
3) Mission Sishu Unnayan – Free Education to all the children in state-run institutions
4) Distribution of land pattas to the landless Indian citizens.

Why Barak Valley is fast receding from the developmental focus of the ruling party is indeed a perplexing question to answer. It is time that the party explains as to why it has failed on almost every single promise that it had made to Barak Valley in 2016. The voters may decide to be lenient towards the party and give them another chance for redemption. But an apology to the voters must flow from an honest admission of shortcomings. It remains to be seen whether the primary debate of this election realigns its focus to development and real issues or it remains embroiled in, as Dr Himanta Biswa Sharma put it, while addressing BJP Karyakartas in Silchar, ” a battle to protect Sanatan Dharma “.