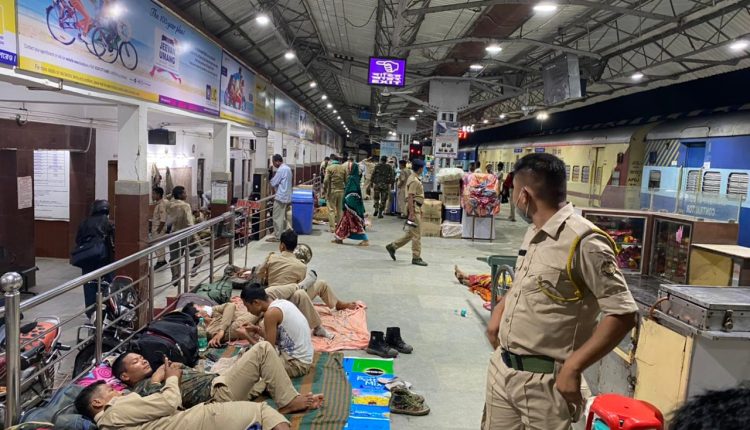 They were called for service in Cachar as all seven constituencies go for polls on April 1, 2021. Their allegation is that they have been misbehaved with and at the same time, they were dejected with the remuneration offered to them.

“We were stationed at Don Bosco school where there is no water in the washroom. We have been buying mineral water all throughout. At NATRiP when we went to get food, we were misbehaved with and that is when we decided that we will boycott,” said one of the officials protesting at Silchar Railway Station.

While misbehaving and ill treatment were their complaints, their primary issue was with the finances. “When were were at Biswanath Chariali in the first phase, each one of us were sanctioned Rs 5,100 as allowance. Here the Cachar Police said they will only gave us Rs 900. Why should we work so hard for such low remuneration?” the protesting home guard officials said.

SP Bhanwar Lal Meena was not available for comment. Repeated calls to him did not incur any response. A senior officer in the Police department said, “Cachar Police is following government orders and all the conveyance has been sanctioned according to the norms. We cannot do something that is not permitted.”

The officer added, “Cachar Police is well-equipped to handle the elections without the home guard officials. There won’t be any shortage of manpower in the department.”

Deputy commissioner of Cachar, Keerthi Jalli also reiterated that the boycott of Home Guard individuals won’t cause a problem for the administration in managing the elections.

Around 1000, individuals associated with the Indian Home Guard department slept at the Railway Station, most of them wearing their uniform.

According to the station master, around 300 of them left at the first train. After the 11:30 train left Silchar station, there were none of them at the platforms.

The personnel damaged properties at NATRiP and have raised several slogans which the Cachar Police Department found derogatory.