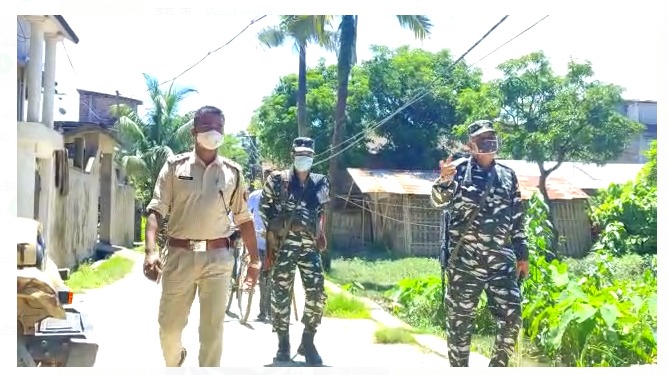 The Bajrang Dal in Silchar has alleged that on Wednesday, on the occasion of Eid-ul-Adha, beef was sold in many parts of the city. It has been learned that a few police teams have visited different areas and verified the veracity of the allegations.

Although the situation was normal that day, on Thursday morning at the Panchayat Road area of Silchar town, it was alleged that the intestines and other parts including the skin of a dead animal were left in a packet nearby the road. Then the locals got involved in this and helped to clean it up on their own. Meanwhile, a case has been filed at the Rangirkhari police station on behalf of Bajrang Dal’s Silchar branch. They have made it clear that if the culprits are not punished after an adequate investigation into the incident, the Bajrang Dal will go on a massive protest on this issue.

On Thursday morning, locals in the area found the remains of a dead animal in a plastic bag near a pond in the Panchayat Road area. The area is inhabited by both Hindus and Muslims. Since it was Eid the day before and there were allegations that beef was sold openly in different areas of the district. Some people suspected that those were abandoned parts of a cow’s body. The discovery of the packet caused a controversy in the area and people from several social organizations, including the Bajrang Dal, gathered there. A large force of police arrived in the area and some locals helped to pick up the abandoned packet. It was then gotten rid of by burying in a nearby spot.

Shubho Ranjan Das has filed a case on behalf of the Bajrang Dal. He said, “A packet full of cow bones, entrails and skin was found in the area. Therefore it has hurt the sentiments of the Hindus residing there and some locals of the area have also mistreated them as they had protested this cow slaughter. Shanu Laskar and Manzur Ahmed Laskar, along with several others, verbally abused and threatened Purnajit Paul and Susan Das, residents of the area. Proper action must be taken immediately and a case should be filed against them.”

On behalf of the Bajrang Dal, Mithun Nath said, “Yesterday, cows were slaughtered and beef meat was sold in public in several places all over the district. When the state Chief Minister had ordered a ban on beef sales, some people are still ignoring it. We are peace-loving people, but if our religious sentiments are repeatedly hurt, we can’t stay tolerant anymore. If they do not take any legal action against the perpetrators, we will bound to demonstrate a massive protest in the coming days. Then the administration or the people of the society should not blame us.”

In the area where the incident took place, some people also alleged that the remains of the dead animal were deliberately packaged and brought to the area. A minor has testified that in the morning he saw some people tumbling and dropping the packet near the pond.

On behalf of the locals, Mizan Laskar said, “Locals have claimed that a tuk-tuk (e-rickshaw) early in the morning stood for a long time near the pond and there were two or three outsiders inside it. It’s quite natural for a few persons to stand nearby the road so nobody paid any heed to that then. But now we have realised why those mysterious persons were standing there for a long time. Yesterday, some people complained that beef was being sold in the area. We called them and made it clear that beef was not being sold at all. Rather, on the occasion of Eid, mutton was being sold there. Both the Hindu and Muslim communities in the area are equal, and we have never quarreled with each other’s religious beliefs before. Reviewing the situation later, it has been understood that some people from outside have intentionally left the packet full of remains of a dead animal, which most probably isn’t even the remains of a cow. We want peace at any cost and therefore, requesting the district administration to help us in this regard. We have had talks with our Hindu neighbours of the area and they too have placed their faith in us.”

Recently, Chief Minister Himanta Biswa Sarma has introduced a bill banning the sale of beef in public places in the state. Awareness of this issue has been raised in every part of the state and considering the situation, the police and the administration have been on high alert on the occasion of Eid. Despite small vain attempts, no major beef controversy took place on that day. But on Thursday morning, the situation almost got out of control. However, the locals of the area have handled the situation in a pretty calm manner.