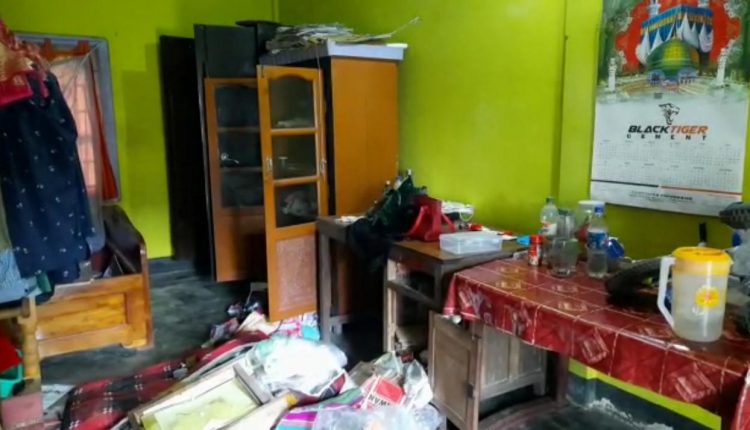 Another armed robbery in Sonai; Rs 40,000 and gold jewellery looted

In the past few months, instances of armed robberies have shaken the district of Cachar on several occasions. After last week’s robbery in Sonai LAC’s Nutan Bazar area, this time South Krishnapur area of the district has also been hit by armed robbery. Last night, Aftab Uddin Majumder’s residence was attacked by 10-12 dacoits who took away around 40,000 rupees in cash as well as gold jewellery after ransacking the entire house at gunpoint.

The robbery took place around 1:15 am on Monday (or Tuesday morning) at Aftab Uddin’s house situated beside the National Highway road in South Krishnapur under the Rangirkhari PS. According to one of the family members, “Last night at around 1:15 am, a group of armed dacoits barged into our house threatening to kill us if we protest or shout. Seeing that they were 10-12 in number, we immediately submitted to them and appealed to not harm us as we were willing to co-operate with them. The dacoits then ransacked our entire house and also asked me to unlock the locker in our wardrobe, from which they took away Rs 40,000 in cash.”

But in the meantime, while all of this was going on, one of the family members managed to break free from their clutches and ran away to escape by jumping over the wall. He sustained minor injuries along the way, but sensing that he could alarm the entire neighbourhood and call up the police, the robbers then hurriedly left the place with everything that they could get their hands on and locking up the family from outside before leaving. Later, a police patrol vehicle stopped by and tended to the victim family and asked them to file an FIR at the local police station.

Aftab Uddin Majumder is a retired employee of the Fishery Department. He appealed to the administration to look into this matter and take strict action against these groups of dacoits so that the people of this valley could sleep in peace. “Last week too, we had a robbery at the nearby Nutan Bazar area. Today, it happened in my home. Such frequent instances have instilled a sense of panic among the people as they’re living in fear these days. Hence I request and appeal to the administration to kindly take this issue with utmost importance and curb such terrorising incidents of robbery. Last night, a woman in my family had to face an axe put against her throat, and it could’ve gotten worse any moment. But luckily, nobody got harmed in the end”, said Mr Majumder.

When Barak Bulletin got in touch with Rangirkhari Police OC Samar Jyoti Das, he said, “Today, the family filed an FIR at our station, and we’ve already started our investigation. It will surely take some time, as these groups of dacoits have been running havoc for quite some time now. As of now, we’re gathering all the relevant information and pieces of evidence to crack down those dacoits at large.”