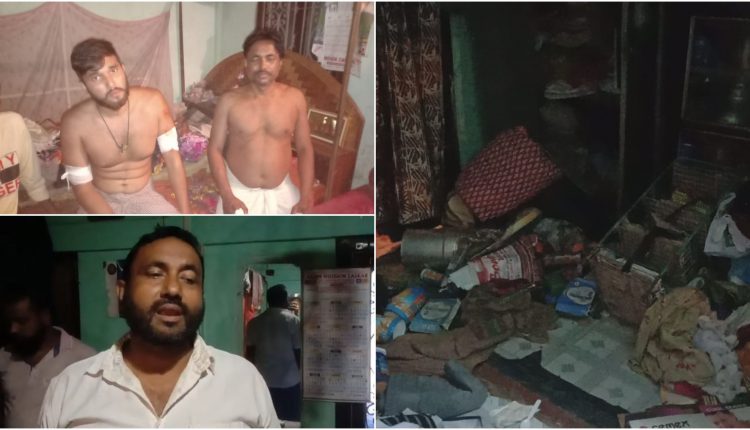 Dacoits continue run ruckus in Cachar district. In yet another case of burglary, around 20 armed men entered the residence of businessman Abdul Manik Laskar in Udharbond’s Dayapur Part II area. According to the family members, at around 11:45 pm last night, the dacoits started banging the door of Abdul Manik Laskar.

“We were caught by surprise and that is why when they banged the door we thought there is a crisis and immediately opened the door. To our dismay, they were dacoits. One man with a dagger forced me down on the floor and started asking for the keys to the wardrobe. My wife handed over the keys to them and they started looting the house,” says Abdul Malik Laskar, owner of Udharbond Public Store.

Udharbond Public Store is one of the biggest grocery wholesalers in the locality. Abdul Malik Laskar informed that cash around Rs. 5,50,000 and jewellery worth around Rs 5,00,000 were looted by the dacoits from his house. His son Shoib Akhtar Laskar was attacked by the dacoits and he has incurred injuries.

In the same residence, at a different unit resides Ripon Uddin Laskar, brother of Abdul Manik Laskar. After looting Abdul Manik Laskar’s house, the dacoits moved to Ripon Uddin’s house and started banging the door. “I and my wife tried to stop them so, we held the door tight. They said they are from Police and I must open the door. Eventually, they managed to break it open and then started assaulting me and my wife. They have chopped both my index fingers with a dagger. They pulled the earrings out of my wife’s ears forcefully,” said Ripon Uddin Laskar.

“The dacoits looted both the wardrobes, I had cash around Rs 2 lakh and Jewellery worth around Rs 5 lakh. They took away everything and left all of us bleeding on the floor. They even attacked my child,” added Ripon Uddin Laskar, brother of Abdul Manik Laskar and business partner at Udharbond Public Store.

DSP Cachar, Kalyan Kumar Das and OC Udharbond, Sanjeeb Kumar Das visited the spot after the incident was reported to the Police. Speaking with Barak Bulletin, OC Udharbond said that the matter is under investigation and therefore the Police won’t reveal details at this stage.

It is worth mentioning here that in January 2021, PWD contractor and former GP president, Anamul Haque Laskar’s residence in Pangram, Udharbond was looted in a similar case of burglary. Around 25 armed men had looted his house and assaulted the family members. Cachar Police failed to arrest anyone related to that incident. The Police department has seen a rejig after Himanta Biswa Sarma took over as the chief minister of the state. It remains to be seen how the new formation with a new SP at the helm deals with yet another case of armed burglary.