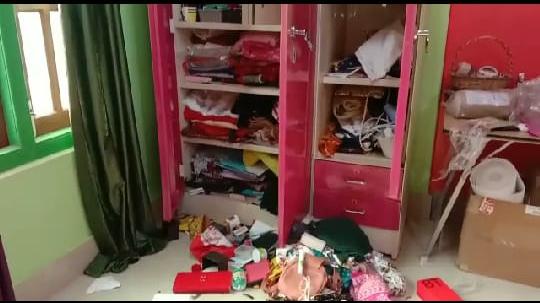 In the early morning hours of Sehri during the month of holy Ramadan, a shocking incident of robbery in the Budhurail area of the Cachar district has shaken the entire neighbourhood. A group of around 20 robbers fully armed with guns and various weapons barged into the house of Didhar Ahmed Laskar last night sometime around 1:30 am and kept the entire victim’s family captive under gunpoint while they took away cash and gold worth around 10 lakhs. This robbery has sent panic in the minds of the people residing here and the police are already investigating this case of armed robbery.

According to Didhar Ahmed Laskar, around 1:30 am, when he was going to the toilet, he heard a scream calling out his name which suddenly frightened him. “As soon as I heard the cry, I knew something has happened so I quickly ran back inside and tried to lock the door. But they somehow overpowered us and forced their way inside. At first, I tried to resist them but the robbers beat me and my family members as well, so I gave up and tried to cooperate with them so that they would leave us unharmed. When they asked us for cash, I showed them the drawer where it was kept. They tied me and my brother-in-law with ropes and then broke that drawer to snatch the cash lying there. They didn’t even let us speak and kept cursing and scolding us throughout. Then they went to the next room where my wife was kept captive but we being tied down couldn’t tell what exactly happened there,” said Didhar Ahmed Laskar, the patriarch of the family.

The wife of Didhar Ahmed Laskar said that when she got up around 1:30 am to prepare food for Sehri, she realised that some miscreants were trying to get inside their house. Further adding, she said, “When I heard somebody screaming about robbers trying to barge in, I immediately left the kitchen and found that the robbers had already broken into our house through the front door. Then they started asking us about keys and money and gold at gunpoint and when I protested, they beat me on my knees. They also snatched my gold earrings and took away all the gold and cash kept in that box.”

Immediately after the robbery took place, police were called by the relatives of the family. Cachar Police has already secured the scene of the robbery and is investigating the case. It is to be noted that, robberies have taken a sharp upward trajectory in the Cachar district in the past few months. Even in the last few months, several robberies taking place all over the district has put a big question mark on the security provided by the District Administration.