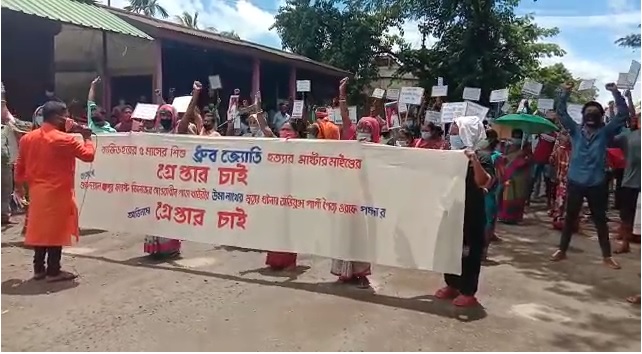 Members Hindu Jagran Mancha has launched a mass agitation in Silchar – Mizoram road near Dholai. The agitators have blocked the road demanding immediate arrest of the mastermind behind the gruesome kidnapping and murder of 5-month-old Dhrubojyoti Nath.

The Kajidahar, Sonai resident, Nath was kidnapped while asleep with his mother and then later murdered. “The Police is trying to misguide the public. They give different statements at different times. We want a CID inquiry of the matter, we want the mastermind behind bars, we want justice for the 5-month-old,” said the spokesperson of the protest.

The spokesperson asserted, they will continue with their protest unless DC Cachar intervenes. “We are not going to move from here even if they impose lathi-charge on us.”

He added, “We want the DC Cachar to come here and give us in writing by when they will be able to arrest the mastermind behind Dhrubojyoti Nath’s kidnapping and murder. The Police is twisting and turning, so, we want a statement from DC Cachar. Unless DC Madam comes here and talks to us, we are not going to withdraw our protest.”

Apart from Dhrubojyoti Nath-kidnapping case, they also want an update on Uma Nath’s suspected murder. Uma Nath daughter of late Birendra Nath is a resident of Gurudayalpur forest village under Dholai Police station. Uma Nath was mysteriously found dead a few days back. She was employed as a maidservant at Gargi Patiya’s residence in first Link Road who is reportedly a suspect in this case. The Jagran Mancha is demanding an immediate arrest of her alleged murder.

“The Police is not doing its duty. Rain or storm, we are not going to walk away unless we meet the DC madam,” concluded the spokesperson of Hindu Jagran Mancha.