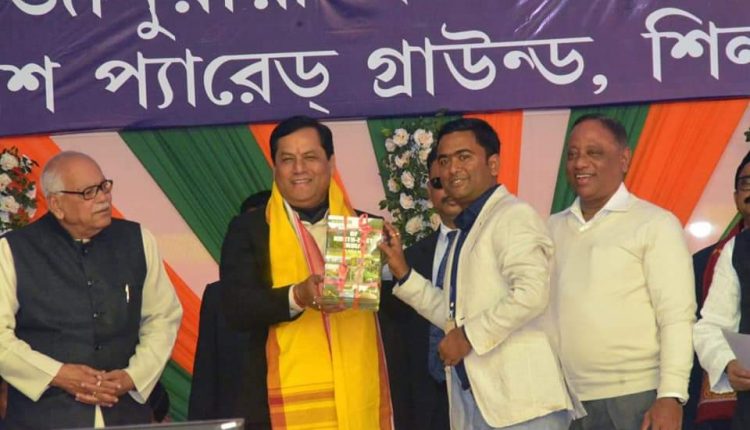 Ashish Haldar asks for BJP ticket from Sonai; "I believe party won't deny me," he says

The election is knocking at the door and several party workers are writing to the respective political party’s district and state headquarters asking for a ticket. One of the architects of BJP’s victory in Sonai, Ashish Haldar has now written to the party’s high command asking for a ticket.

He is a veteran in BJP and a popular leader among the grassroots workers. In BJP’s Mandal committees and block committees in Sonai, Ashish Haldar holds a strong connection. However, he is asking for a ticket from a constituency where it all looks decided.

In one of his recent visits to Barak Valley, BJP’s state president Ranjeet Dass visited Sonai Legislative Assembly Constituency. While addressing the party workers in one of the events, Dass said that if Sonai elects Aminul Haque Laskar again, they won’t be electing an MLA but a Minister. Not only that, he added that following Sonai Model, BJP will field more minority candidates in Assam.

The deputy speaker as well as the only BJP MLA from the minority community, Aminul Haque Laskar is not only a hot favorite to get the ticket, but also likely to get a berth in the next Cabinet if BJP forms the government. Haldar is of the view that all the permutations and combinations are for the party to evaluate.

“I have been in the party for a long time and have been actively working for the BJP. This is not the first time I have expressed my willingness to contest elections from Sonai on BJP’s ticket. I have done it again and now it for the party to decide,” said Haldar while speaking with Barak Bulletin.

He opined that the permutations and combinations in Sonai are different from other constituencies in Cachar. “There is a Muslim vote share and then there is a Hindu vote share. I am sure that the party leaders will equate all of that before finalising on the candidate,” said Haldar.

He feels that the party will not revoke him this time. “I had asked for a ticket last time too. At the eleventh hour, senior party leader Parimal Suklabaidya among others asked me to take the back seat and had assured me that next time my candidature will be evaluated once more. In 2016, we all worked hard to secure victory for Aminul Da (Haque Laskar). I feel, the party won’t revoke me this time and 2021 will be my term,” asserted Haldar.

When asked, if BJP denies him the ticket, will he contest as an independent candidate, he replied, he would not like to reveal his future strategies at this stage. “I am sure BJP will evaluate me as a candidate and not say no to me. I have asked for a party ticket and that is what I am thinking about at this stage,” he concluded.