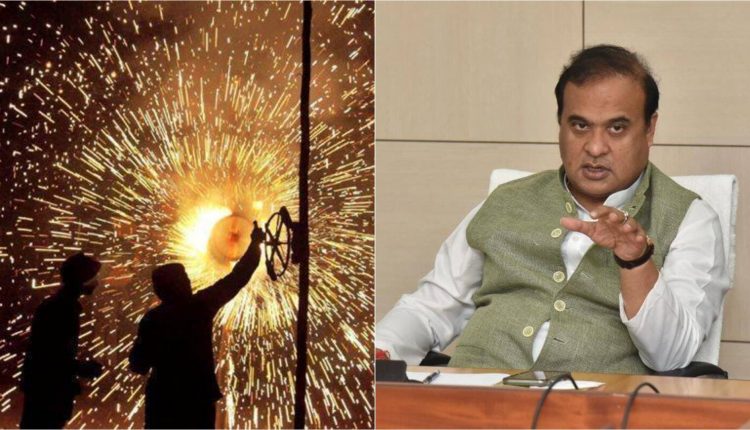 On October 22, Pollution Control Board, Assam had issued a notification imposing a total ban on sale or bursting of crackers that are not classified as green crackers. Moreover, the board mandated that Green Crackers can only be burst between 8:00 pm to 10:00 pm on Diwali.

This has hurt a section of people in the state and many questioned the imposition of ban during a Hindu religious festival. The chief minister of Assam, Dr. Himanta Biswa Sarma took cognizance of the popular sentiments.

He issued a statement which reads, “Assam Pollution Control Board has, reportedly, suo motu, without any consultation with Government, issued an order banning the sale of firecrackers & other restrictions. We’ve taken note of this. The entire issue is being reviewed afresh, holistically, keeping people’s sentiments in mind.”

For the records, State Pollution Control Board, Assam is an autonomous statutory organization constituted on 2nd June, 1975 under the provision of section 4 of the Water (Prevention & Control of Pollution) Act 1974 with a view to protecting the environment and preventing and controlling the pollution of water and air in the State of Assam, occupying a prominent niche in progressive and industrial development of the country.

The Pollution Control Board noted that crackers can have a negative impact on the COVID survivors. In its notification, it stated, “In compliance with the directions of the Hon’ble National Green Tribunal in Original Application No. 249/2020 dated 09.11.2020 [Para 48(v)], dtd. 01.12.2020 [Para 32 (i, il & iii)] and also considering the fact that the bursting of firecrackers releases a copious amount of harmful chemicals, which have severe impact on the respiratory health of vulnerable groups and such pollutants can further aggravate health conditions of COVID-19 positives persons besides person staying in home isolation.” The notification was signed by member secretary, Dr. Shantanu Kumar Dutta.

It adds, “In exercise of the powers conferred under Section 31(A) of Air(Prevention & Control of Pollution) Act, 1981 read with Rule 35 of Air (Prevention & Control of Pollution) Assam Rule, 1991 and keeping in view the need of public interest to curb high air pollution, Pollution Control Board, Assam hereby directs a complete ban has been imposed on bursting and sale of all kinds of firecracker except green crackers in the State of Assam till further order in this respect.”

In the State of Assam only green crackers can be sold and bursting is allowed only for two hours during Deepawali festivals from 8 pm to 10 pm; during Chatt Puja from 6 am to 8 am and during Christmas & New year eve from 11.55 pm to 12.30 am, adds the notificaton.

The board instructed District Magistrates and Commissioners/ Superintendents of Police shall implement the aforesaid directions. Daily Action Taken Reports to be submitted to Pollution Control Board, Assam.

Now, if the Government of Assam intervenes and forces the Pollution Control Board to withdraw its ban is something that remains to be seen.