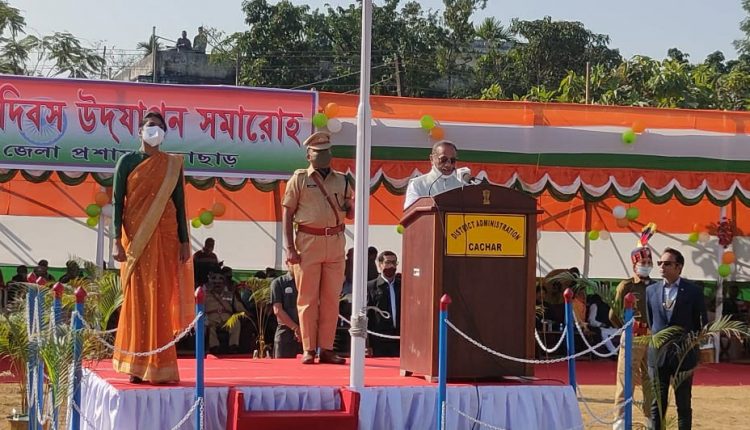 State Forest Minister Parimal Suklabaidya hoisted the national flag in Cachar on the 72nd Republic Day programme organised by the district administration. In his hour long speech, he reiterated the various works performed by the state government. At the beginning of the speech, he paid homage to the martyrs of the Assam movement and mentioned how the government was thinking of protecting the families of those martyrs. Besides, he also talked about protecting Assamese pride, development plans for different tribes of the state, restated various announcements made by the state government and honoured Covid warriors in his speech. Apart from mentioning about the newly created Bio Diversity Park and the ongoing construction of a bridge over the river Barak; progress about the construction of the planned Greenfield airport, logistics park or even the mini secretariat largely remained untouched by the minister in his speech. Meanwhile, the schoolgirls began to feel dizzy and some even fell on the ground after standing in the sun for more than an hour during his speech. However, later they took part in the parade on their own.

The State Minister and current Dholai MLA, Parimal Suklabaidya hoisted the national flag at the police parade ground at 9 am as per the schedule. He was accompanied by Deputy Commisioner Kirti Jalli and Superintendent of Police BL Mina. At the beginning of his speech, he said, “Our government is taking special importance to pay homage to the martyrs of the Assam movement. We are celebrating the day on December 10 and provide financial assistance to the families of those martyrs. The goverment is determined to detain foreigners, resolve border disputes and seal open borders as per the Assam Accord unlike the previous government.” Our government was trying, other governments were indifferent in the past. ” However, his one hour long speech astonishingly did not find a single mention about the eleven Bengali language martyrs who laid their lives protecting the right to speak their mother tongue in Barak Valley. Whether it was a lapse of better judgement or whether the government really has no plans about the Bengali language martyrs of Barak is something only the minister knows. Even if there were no plans, it was wise to mention them atleast once for the sake of “Bhasa Sohider Sohor, Silchar” or “The City of Language Martyrs, Silchar” and it’s inhabitants as it is a human tendency for scepticism to turn cynical in no time.

“The government has already paid huge sums for the protection of the six tribal communities in the state and more will be provided in the future. Our government is committed to leasing land to the Khilongiyas of the state. Tea tribes constitute about 17% of Assam’s population and a lot of money has been spent for their development, schools, toilets etc by our government. Initiative has also been taken to provide jobs to the boys and girls in those gardens. Special projects have been launched for their healthcare.”

The State Forest Minister has been able to gain a good reputation in the country with his initiatives. Regarding the activities of the Forest Department, he said, “Apart from setting up parks in different parts of the state, including Dholai in Cachar district, we have paid special attention to wildlife conservation, protection of plants, forest cover, etc. As a result, 221 sq km of forest area has got increased. At the same time, we also want to develop the tourism industry. We have special plans to turn several areas of the state, including Kaziranga, into tourist places.” However, in this case too, he did not reveal any proposals about promoting tourism in Barak Valley.

Referring to the farmers, he said, “The state government has provided tractors to the farmers, provided them with high quality seeds and there are plans to build high quality markets for them in the future. Talks have been held with Bangladesh for constructing international markets. Students are taking classes online for continuing their studies during covid period. The government has some big plans for making smart classrooms in the future and is working hard to improve the major languages spoken in the state.”

During his speech, students from different schools stood in the sun for about an hour. At one point, several students began to feel dizzy. However, their physical condition improved as the teachers and classmates came forward to help them. At the end of the minister’s speech, they took part in the Republic Day Parade.

The minister then paid homage to the two freedom fighters and watched the parade. Tableaux were displayed by various government departments in the programme. Later, the 72nd Republic Day celebrations ended with a cultural program.