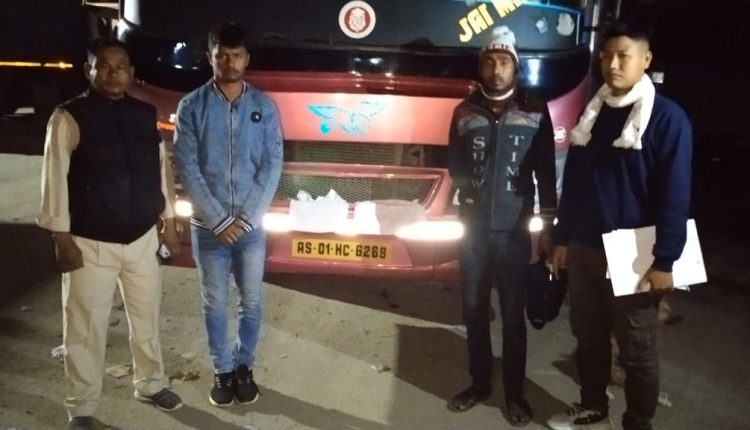 They were traveling to Guwahati through a night superbus (AS-01-HC-6269) coming from Agartala; while interrogation and checking, these two were unable to produce any documents or give any convincible answer. After further interrogation, they confessed about their Bangladeshi identity and informed that they hail from the Gopalganj district of Bangladesh. They admitted that they entered into Indian Territory through the Akhaura border near Agartala and boarded the bus to Guwahati. They were looking to go to West Bengal.

Police have also summoned the counter manager and the caretaker of Sherowali Bus under CrPC 41 in connection to the frequent detention of Illegal Bangladeshi Citizens from Night Super Buses at Churaibari gate, informed Mintu Shil, the police in charge. Police will interrogate them to bust the nexus of illegal cross-border motilities. The detainees will be produced to the court of the district magistrate in Karimganj. One of the detainees, Sheikh Bappi, is an Indian Citizen of West Bengal who went to Bangladesh to bring Masum Billah to India.

On the other hand, this frequent detention on Bangladeshi Nationals at Churaibari Gate raises many concerns among citizens in Both Tripura and Assam. People are questioning the security at the Bangladesh border and demanding a special probe into the matter.