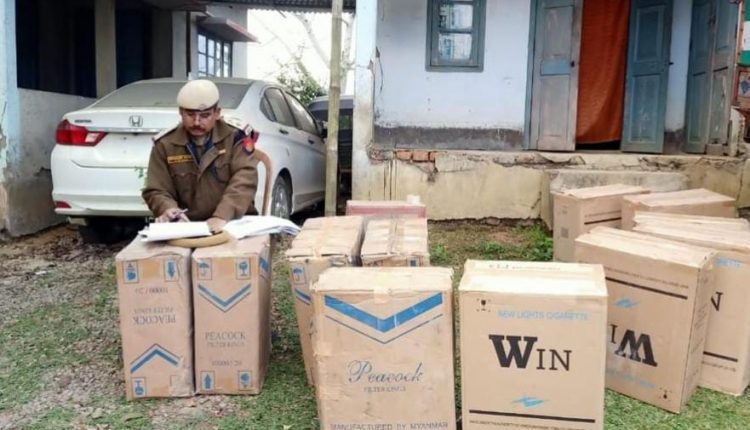 Huge number of Burmese cigarette bundles were recovered from two Tata trucks coming from Manipur. The Assam Police has achieved this busted on the check gate of  the Assam Manipur border near Jirighat. Two trucks from Manipur with vehicle number MN05C1403 and AS01DC3984 were stopped for checking, while the Jirighat Police has seized 23 cartoons of Burmese Cigarette. The seized cigarettes’ market value crosses 6 Lakh Indian Rupees, according to the Police sources.

Along with this huge narcotic bust, the police was also successful in arresting the drivers of the two trucks. Mohammad Qurban Ahmed of 38 years and Mohammad Suruj Khan of 28 are the two arrested truck drivers who were trying to smuggle Burmese cigarettes into Assam fooling the Assam Police.

Only yesterday, the special DGP of Assam Police Gyanendra Pratap Singh visited the Silchar Sadar Police Station and also spoke about illegal transportation of Burmese Areca through Assam. He warned all the miscreants and mastermind behind it and challenged to take all legal actions against them.

Also last week, Cachar Police has successfully seized a huge amount of Burmese areca (supari) worth upto Rupees 1.5 crore and the police was also successful in arresting a mastermind behind it – Naryan Ghosh.

Since the time Dr. Ramandeep Kaur kaur took over as the Superintendent of Police, Cachar, she has kept the drive intense against illegal transportation of Burmese betel nut through the district. Now it’s yet another development on the Burmese Cigarettes and the SP’s reaction is yet to be seen.