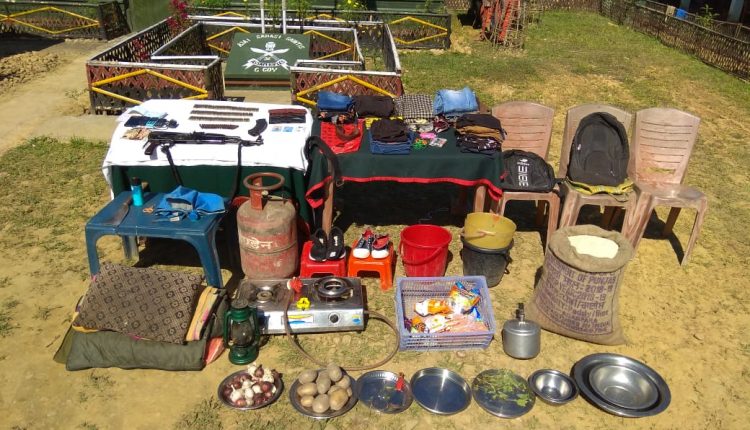 By Bikram Sarkar On November 16, 2019 - 3:45 pm
Share
Shocking news coming in from the dense forests of Ramgaizang, Jirighat in Assam. Today, early morning on the basis of secret tipoff, Assam Rifles 37 battalion personnel from Jirighat Police, in collaboration with Lakhipur Police Sub-Division launched one operation in the thick jungles of Ramgaizang.

As per the information released by the Assam Rifles, the officials raided the forest and destroyed makeshift camps used by NSCN(R) and ZUF cadres to carry out their activities in Zeliangrong Region. In the operation, two cadres were apprehended and one AK-56 rifle with huge ammunition was also recovered.

One of the two arrested is Pougonglong also known as Lucky, (28, S/o, Gongkinlong) a resident of Nungtek, Tamenglong. After interrogation, as per the Assam Rifles officials, he revealed that he is a Lieutenant of NSCN (R). The other individual is Sagu Rongmai, (40, S/o, Aningdon) and a resident of Ramgaizang part 2, Cachar dist. His rank as disclosed by the officials is captain, ZUF. “Both the individual were involved in illegal extortion, Kidnapping and other criminal activities in Zeliangrong region,” informed the officials.
The seizure list as shared:
(a) 1x AK 56 Rif ( Regn No M2439901)
(b) Carts 7.62 mm Qty – 20 Rds
(c) Carts 5.56 mm of M16 Qty- 123 Rds
(d) Extortion slip book
(e) Mobile phones.
apprehendedarrested AK-56AssamAssam RiflesBarak Valleycadreslakhipur policeZeliangrong
Share FacebookTwitterWhatsAppEmailLinkedin
You might also like More from author
News