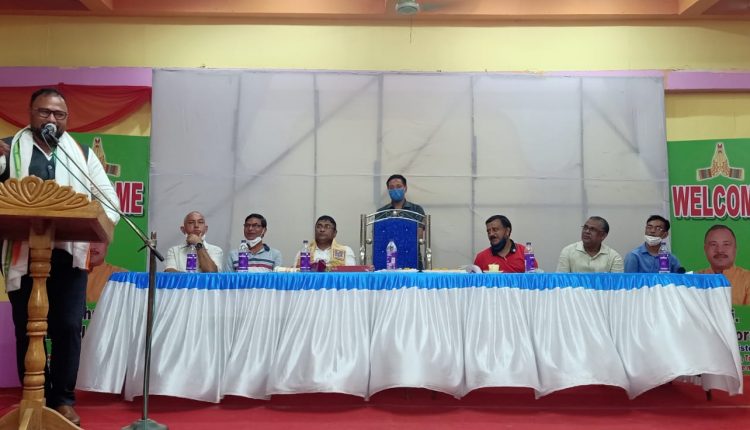 As a part of Silchar MLA Dipayan Chakraborty’s initiative, the Assam State Sports Minister Bimal Borah squeezed out some time to meet with the local sports clubs and organizations. The meeting which was organized at the Ashirwaad Marriage Hall in Silchar saw representatives of various organizations put up their infrastructural problems and other related issues in front of the Minister. He heard all issues with concern and promised help and aid from the Govt. at the earliest.

The Minister came in with a jam-packed schedule and even had visits to Karimganj and Hailakandi planned for him. But due to requests made by Chakroborty, he agreed to communicate and hear from the local sports organisations. Chakraborty says, “I wanted the Sports Minister to know and identify the various infrastructural issues and other matters related to the local sporting clubs here in Silchar. The Govt. of Assam is giving special attention to the Sports development and also to Barak Valley. We all will see the results very soon.”

16 club organisations of Silchar took part in the program. Representatives of the club organisation raised a number of important issues with the Sports Minister. ‌ The issue of how local talent is not developing due to lack of infrastructure has come up again and again in their words. The representatives of the club organization also petitioned the Sports Minister about the need for a field in the News Silchar area, starting from the issue of further funding in the field of sports.

The Sports Minister heard attentively to the various problems of the local sports world. Minister Bimal Bara said, “I am very happy to be able to attend such an event. I have heard all your words. ‌ The present government has paid special attention to sports. Various plans have been taken to improve the sport industry. The Chief Minister has announced to give government jobs to qualified athletes.”

The Sports Minister commended the Silchar MLA for taking the initiative to organize such an event. He said, ‘Local issues come up through such programs. The MLA of Silchar has taken a very good initiative. ‌ I have been visiting Barak for a very short time. But when Dipayan Da requested me for this exchange of views, I immediately agreed. The state government has taken various steps to improve sports infrastructure in each district. ‌ Multiple plans have been taken up. The government has special plans for Silchar. I had a wide discussion with Dipayan Da and I will try to solve the problems that you have raised on behalf of the government.